This week, from Monday, October 30 to Friday, November 3, features the WeHo Costume Carnaval, a Dia de los Muertos block party, a Culinary Fight Club, Selena Night at The Regent, and MUCH more. 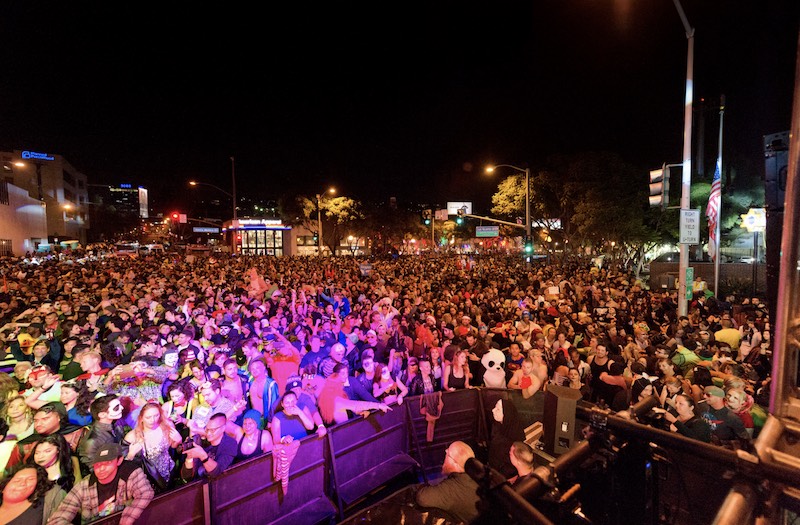 2. Catch a free screening of East L.A. Interchange at Roosevelt High School followed by a panel to discuss the film. FREE

3. Head to the campus of USC to listen to USC Thornton Jazz Orchestra: Celebrating Ella, a 100th birthday tribute to Ella Fitzgerald. FREE

4. Boo at the L.A. Zoo returns for a spooktacular season. Highlights include a “Nocturnal Adventure” maze,  “Animals and Boo” creepy crawler encounters, pumpkin-carving demos and other family-oriented fun.

5. The West Hollywood Halloween Costume Carnaval will bring hundreds of thousands of Angelenos onto the streets of West Hollywood for the annual free event. FREE

7. The Hammer Museum will host a Halloween screening of George Romero’s 1978 classic Dawn of the Dead. FREE

8. Nightmare on Hollywood Boulevard will bring over 2K party goers to Florentine Gardens for a night of music by DJ Inferno of Power 106. Be sure to check for discount tickets before making your purchase. DISCOUNTED (via Goldstar)

9. 1962 horror flick Carnival of Souls will be screened at the Aero Theatre.

10. There’s a Phantom of the Opera (1925) screening with Organ at Walt Disney Concert Hall on Halloween.

11. Knott’s Scary Farm is back with their signature haunted attractions, mazes and thousands of monsters ready to scare the living day light out of you and your crew. Be sure to check for discount tickets before making your purchase. DISCOUNTED (via Goldstar)

12. The Queen Mary’s Dark Harbor will transform into a seaport of the damned for the Halloween season with terrifying mazes and monsters at every turn like the Iron Master and Graceful Gale. DISCOUNTED (via Goldstar)

13. Playhouse Hollywood will transform its club into a House of Horrors for one of the “sexiest and scariest” party in town. DISCOUNTED (via Goldstar)

14. Climb aboard the 17th Annual Ghost Train in Griffith Park on October 13-31 and ride on their iconic train into a spooky setting of animatronics, projections and pyrotechnic. The ride is family friendly with no blood, gore or actors jumping out to scare you like most Halloween experiences.

15. The folks at Rooftop Cinema Club are back with two screenings at their rooftop locations. The Shining at LEVEL in Downtown Los Angeles and Halloween at Montalban in Hollywood.

16. One Colorado will host store-to-store Trick-or-Treating, Halloween family portraits and an outdoor screening of ParaNorman. FREE

17. Urban Death: Tour of Terror at Zombie Joe’s Underground Theatre Group in North Hollywood is a haunted theater attraction featuring a terrifying performance and a maze of inexplicable horrors, unfathomable monstrosities, and the disturbing spirits that walk among us.

18. The Los Angeles Haunted Hayride takes over The Old Zoo in Griffith Park from September 29 to October 31. This years theme is “Clown” and features four different freaky zones, a slew of demonic clowns, a corn maze and more.

20. Mr. C Beverly Hills extends their popular Poolside Cinema series into fall every Tuesday evening, from October 10 through November 21. Visit the gorgeous yacht-inspired pool deck where you’ll ensconce yourself in a lounge chair for a film and elevated bites under the stars. The series continues with a screening of Ghostbusters.

23. Every first and third Wednesday of the month, BEAR CITY brings free comedy and free pizza to Que Sera in Long Beach. FREE

24. 260 Sample Sale LA returns with a Zadig & Voltaire sample sale at their Beverly Hills store November 1-5. Offering up to %80 off of women’s and men’s clothing, accessories and shoes.

25. Give back on Thanksgiving by volunteering for Union Station’s Dinner in the Park. Hundreds of volunteers will gather to serve meals to those in need of a warm tasty holiday plate. Registration will open this Wednesday at 9 a.m.

27. Downtown Los Angeles’ 24th Street Theater will host its 12th Annual Dia de los Muertos Festival this Thursday. The block party will feature performances, crafts, homemade tamales, vendors, face painting and a graveyard where families can make their own altars for their departed loved ones. FREE

28. Culinary Fight Club L.A. Edition comes to Mi Cielo Rooftop Lounge in Downey for the ultimate seafood showdown. Marvel at the many ways seafood can be cooked when chefs are given 45 seconds to sprint to their pantries and 60 minutes to cook up the most “S.E.A. worthy” final plate.

29. Visit the Hammer in Westwood for Latinas Out Loud: Ayer Es Hoy (Yesterday Is Today), a celebration of the richness of Latin American sounds of both the past and present. This musical event will feature Mexico Citys Sotomayor, South Los Angeles band Sin Color and the Chulita Vinyl Club returns to spin throughout the night. FREE

32. Wicked Lit  is a spooky immersive theatre experience taking horror literature and turning them into plays at the Mountain View Mausoleum & Cemetery. It happens every Thursday through Sunday from September 28 through November 9. Check for discounted tickets before making your purchase. DISCOUNTED (via Goldstar)

33. The Actors Gang in Culver City will open their season with Captain Greedy’s Carnival, a musical satire mocking greed, humbug, corruption and predatory capitalism. Follow the story of four innocents who get tricked by a legendary con man. From there on they’ll encounter freaks, illusion, terrifying exhibitions and more. Happening Friday and Saturday. DISCOUNTED (via Goldstar)

35. Latin music icon Selena will receive her posthumous star on the Hollywood Walk of Fame on Friday, November 3. Keep the Selena vibe going that evening when Club 90s presents Selena Night DTLA at the Regent in Downtown Los Angeles!

36. The Griffith Observatory hosts a monthly forum where some of the most amazing phenomena in the known universe are explained and discussed. It’s called All Space Considered and it takes place on the first Friday of every month. FREE

37. The ultimate zombie story Night of the Living Dead, transform into a stage play at Archway Studio in North Hollywood. The adaptation pays tribute to the classic horror film with a twist, it’s set in modern times. DISCOUNTED (via Goldstar)

38. Metro Art presents “L.A. Documentaries at Union Station,” a celebration of the city of Angels through true stories on film. Continuing the series is “Mur Murs” this Friday in the Historic Ticketing Hall. FREE

39. The Groundlings: The Completely Different Late Show is a hilarious improv show by the cast of the Groundlings’ Main Company. Audience shout suggestions throughout the night for improvisational scenes performed by some of the best in the business. It’s also a testing ground for brand new material for the Groundlings’ main show. DISCOUNTED (via Goldstar)