Every week in Los Angeles there are tons of great things to do (even before the weekend gets started) that we think you ought to have on your radar. With that in mind, we put together a list every Monday through Friday morning to keep you in the know about what’s happening in the city you love (or maybe just like).

Remember you can always go to our L.A. events calendar page to get an updated rundown of what’s happening around the city. Hope you find the rundown useful and, as always, enjoy your week! 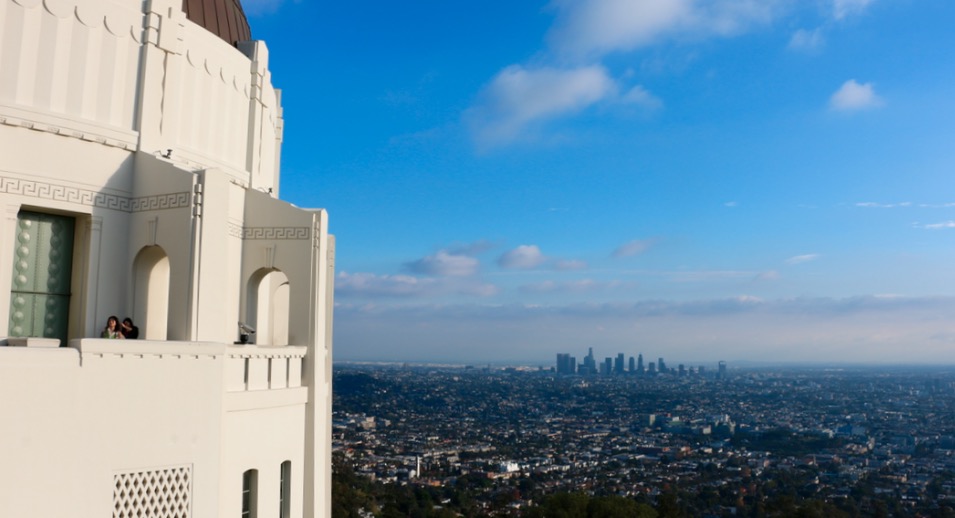 Looking at Los Angeles from Griffith Observatory. Credit: Brian Champlin / We Like L.A.

2. Head to Frogtown’s artist-run space Tin Flats every Monday and Tuesday now until Nov. 27 for a free drive-in movie screening curated with some very special programming. Presented by The French Los Angeles Exchange, this project presents films, performances and exhibitions from artists in the program, as well as a film that echoes their own work. FREE

3. Take a break from your dietary restrictions at Cheat Day Land, Los Angeles’ newest pop-up museum celebrating the snacks and treats that we dream of during our workouts. Featured installations and experiences ranging from a donut gym with pastry dumbbells to a life-size cereal bowl, an art gallery, and much more. Cheat Day Land is here for an entire month, from October 1-31. Check for discounted tickets before making your purchase. DISCOUNTED (via Goldstar)

6. Beyond Fest, Los Angeles’ strangest, scariest, and largest genre film festival returns Sep. 26 to Oct. 9 with another year of bold programming. Sharing a newfound partnership with Hulu and Shudder, 2018’s program boasts an absolutely massive lineup – the festival’s biggest yet – of fan-favorites, nightmares, and oddities, along with bold premieres.

7. Hollywood Shorts is a monthly screening program dedicated to showcasing the best of international and American short films. Shorts are screened at The Ford followed by a Q&A with the filmmakers.

8. 260LA will host a Rent the Runway sample sale up to 90% off retail price from October 9-14 in their Beverly Hills location.

9. ArcLight Hollywood will screen the 1950’s classic Creature From The Black Lagoon.

10. Do yoga in a truly unique space this Tuesday when the Aquarium of the Pacific in Long Beach host a morning yoga session in front of their three-story tall Honda Blue Cavern Habitat.

11. E.P. & L.P. in West Hollywood continues their stylish cinema series Melrose Rooftop Theatre with a screening of A Quite Place, Silence of the Lambs and more.

13. The Garvey Ranch Observatory will host an evening of astronomy with members of the Los Angeles Astronomical Society. Guest will have a chance to go into the dome to view the stars, enjoy a star party on the lawn, and learn how to build their own telescope. The observatory is open to the public on Wednesday nights only. FREE

14. The Skirball will host a series of discussions on the intersection of gender and L.A.’s restaurant culture. Moderated by food historian Lara Rabinovitch, the first installment will include Lien Ta of Koreatown’s Here’s Looking at You. The talk also includes samples of Lien’s food.

18. Head to this year’s IndieCade to check out independent video games from around the world. Guests will be able to preview and play games, join in on forums and workshops. The signature event will”Night Gaming”, featuring gameplay underneath the night sky. Happening Oct. 11-13.

19 .Nights of the Jack is a half mile trail filled with thousands of hand-carved and illuminated Jack O’Lanterns. Family friendly and located in Calabasas, the experience is filled with pumpkins carved into notable animated characters, movie stars, sports heroes, and many more. Happening Thursday through Sunday.

20. The Queen Mary’s Dark Harbor will transform into a seaport of the damned for the Halloween season with terrifying mazes and monsters at every turn. Happening Thursdays and through Sundays through Nov. 2. Check for discounted tickets before making your purchase. DISCOUNTED (via Goldstar)

21. Critically acclaimed, avant-garde haunt Creep returns with ‘Awake.’ The walkthrough thrusts participants through a 75-minute series of horrific situations in a shockingly cinematic fashion. As a result, you are placed face-to-face with your worst fears, presenting an incredibly unique and intimate horror experience. Happening at ROW DTLA Thursday through Sunday.

22. The Paley Center for Media in Beverly Hills partners with Words on Dance to present, Words on Dance an evening celebrating Jerome Robbins and West Side Story as part of PaleyLive Fall 2018 season. The program will feature clips from West Side Story plus rare TV interviews, behind the scenes home movies and dance footage.

23. Beauty² will bring together 40 curated brands in the mindful beauty industry for two days of shopping, complimentary glam appointments, cryogenic facials and much more. Admission is free.

24. Face your fears during Universal Studios Hollywood Horror Nights happening Thursday through Saturdays till November 3. This year, the Stranger Things maze is the main attraction. You’ll also get to experience bone chilling attractions by American Horror Story, The Shining, Halloween, Krampus, Ash vs. The Evil Dead and Walking Dead. Check for discounted tickets on select days. DISCOUNTED (via Goldstar)

25. The Second City will host the Los Angeles Diversity in Comedy Festival from October 11-14 celebrating performers of diverse backgrounds across race, gender, disability, sexual orientation, and gender identity through performances, panels, and workshops.

26. Recent Spanish Cinema is a 4-day film series promoting Spanish films from Spain in the US. Several films will make their Los Angeles debut during the series. Running October 11-14 at the Egyptian Theatre.

29. From Oct. 12 to 14, Comedy Comedy Festival makes a return to Los Angeles, featuring a slew of comedy shows, standup comedians and written performances.

30. Spooky season is in full effect at San Fernando Valley Halloween Drive-In Nights, where you can enjoy a classic horror film at the Lake Balboa Complex, where you will be able to park your vehicle, listen to the movie via your radio speakers, and take in a double feature to match the season. Hocus Pocus and Christine will be screened on Friday. The following day, October 13, see Beetlejuice and A Nightmare on Elm Street.

31. Zombie Joe’s Underground Theatre in North Hollywood presents their annual Halloween iteration of Urban Death. Guests will wind through a short maze before entering a darkened theater where series of disturbing vignettes will be presented one after another. Happening Friday and Saturday. Check for discounted tickets on select days. DISCOUNTED (via Goldstar)

32. Spatial Reality: Artists Explore the Future of XR is an experiential program hosted by sp[a]ce gallery at Ayzenberg in Pasadena. Expect virtual reality, augmented reality, and mixed reality, from over 25 world-class artists working in the field. The show opens October 12, with special events happening every Saturday and Sunday until October 28. General admissions is free.

33. The Haunted Hayride returns September 29-October 31 at The Old Zoo in Griffith Park featuring four different Scare Zones, including trick or treating in a blood-curdling neighborhood and riding on the Scary-Go-Round and taking a ride on the main attraction the Haunted Hayride. Check for discounted tickets on select days. DISCOUNTED (via Goldstar)

35. Knott’s Scary Farm is back with their signature haunted attractions, mazes and thousands of monsters ready to scare the living day light out of you and your crew. Happening Thursdays through Sundays. Check for discounted tickets before making your purchase. DISCOUNTED (via Goldstar)

36. Haunted Little Tokyo is presenting a series of Japanese horror films from some of the best horror visionaries this month. The series continues with a screening of Jinro Game at Union Center for the Arts.

37. The 19th Annual Reign of Terror is one of the largest haunted houses in Southern California, containing a total of eight unique themes spread among 105 separate rooms in over 23,000 square foot space.

38. Get spooked during Paramount Pictures After Dark Tour: Tales From The Other Side where you’ll hear scandals of yesteryear and the lost souls who haunt the studio lot by moonlight. The tour starts at dusk with champagne as you head into the studio lot where you’ll weave in and out of sound stages and the darkest corners of the infamous backlot. You’ll end the night next door at Hollywood Forever Cemetery. Happening Fridays and Saturdays. DISCOUNTED (via Goldstar)

41. HorrorWorld is a collection of three separate haunts in one location presented by horror FX company Bone Yard Effects. Mazes include Into the Black, The Psycho Sanitarium, and The Fleshyard.

42. Six Flags Magic Mountain in Valencia has transformed into Fright Fest, offering six mazes, multiple scare zones, and the chance to ride some of your favorite coasters—including Twisted Colossus and Full Throttle—in the dark. Happening Friday through Sunday.

Cheers to 60 years! Join us on October 11th to help Celebrate 60 years of SRC featuring $.60 Dave’s Margarita’s! This offer is available from 11AM-7PM with a purchase of any appetizer or entree & a limit of 2 per person.🍹🎉 #cheers #srcis60 #thereef #60 #longbeach #dtlb #margaritas #happybirthday

On Thursday October 11, Specialty Restaurants Corporation (SRC) will celebrate their 60th anniversary by offering $0.60 Dave’s Margarita from open to 7 p.m. at several SRC dining destinations. A tribute to SRC’s founder David Tallichet, the margarita is made with fresh lime juice, orange liqueur, Camarena Tequila, Grand Marnier and Cointreau. The promo can be redeemed (up to two per person) when you purchase an appetizer or entrée. Restaurants participating in Los Angeles include Castaway in Burbank, Whiskey Red’s in Marina Del Rey, Reef in Long Beach and more.