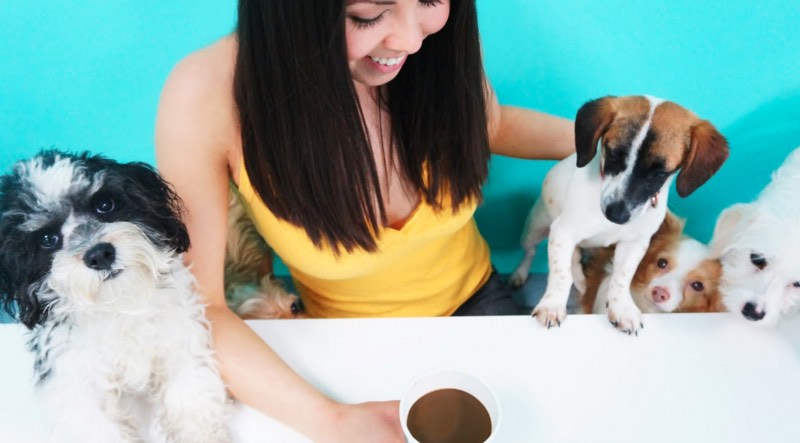 Image via The Dog Cafe

With the help of a little audience suggestion, the The Independent Shakespeare Co. creates a fully improvised, brand new Shakespearean masterpiece using the language, style and themes of The Bard himself. There will be two shows at The Largo this week, Monday and Tuesday at 8:00pm.

Beverly Hills Culinary Week runs Monday, April 4 to Friday, April 8. Over 50 restaurants, hotels, and retail stores in various parts of the city will offer culinary experiences and dining specials during the week including restaurants by Wolfgang Puck, Thomas Keller, and Nobu Matsuhisa.

3. That’s Gold! at The Bootleg Theater

That’s Gold! is a free comedy revue hosted by Karl Hess & Nick Rutherford, put on at the Bootleg Theater every first and third Monday of the month.

Salt & Straw partnered up with Larchmont Charter and Westminster Elementary (Venice) students to create the April flavors at the two shop locations. A portion of proceeds from the sales of these flavors will go toward both schools. Come try Caramel Cherry Chocolate Cheesecake, Waffle & Syrup, Coconut Flan and more for a good cause! Flavors only availble until the 27th.

7. Rain a Tribute to The Beatles

See The Fab Four’s music brought to life for just one week at the Hollywood Pantages. This Broadway hit features authentic costumes, multimedia effects and perfect live renditions of unforgettable Beatles songs such as “Can’t Buy Me Love,” “I Want to Hold Your Hand,” “Hey Jude,” “Let It Be” and much more. Rain: A Tribute to the Beatles plays April 5-10. Get more information and discount tickets via Goldstar.

The Crest Theatre in Westwood will celebrate the 100th Birthday of Gregory Peck by screening “To Kill A Mockingbird”, naturally birthday cake will be served after the screening in the theatre lobby.

West Hollywood’s new Japanese restaurant, ROKU will host an interactive Teppanyaki Dinner in collaboration with Table8. In addition to high-end proteins such as Filet Mignon and Nova Scotia Lobster Tail, all-inclusive tickets will include a complimentary craft cocktail, an order of decadent lobster garlic noodles, and traditional hibachi shrimp. Tickets can be purchased online here.

Kidspace Children’s Museum is free from 4:00pm to close on the first Tuesday of every month.

“Cut it out” Dave Coulier from Full House and most recently Fuller House will perform an exclusive show at Flappers Comedy Club this Tuesday at 8:00pm. Tickets cost $20.00.

13. Free Day At The Page Museum

This live variety show features big names in a number of specialties like comedy, magic, and music. Happening every Wednesday at Way 2 Much Entertainment in Echo Park all acts have four minutes to be wildly entertaining. Audiences might just see a popular comedian, a crazy trapeze act, a comedy sketch or something completely crazy, you wont know till the show starts! The fast paced variety hour averages about 14 acts per show.

El Cid ​Short Film Night, celebrates L.A. independent film in a speakeasy environment once a month. Watch latest works from some of L.A.’s brightest indie filmmakers while sipping on Spanish inspired cocktails like sangria and jalapeños margaritas. $10 at the door.

Morgane Le Fay is having a eight-day sample sale in Santa Monica from April 6-13. Discounts will start at 80%.

Reverend James Lawson helped launch the Nashville sit-in campaign that desegregated the Woolworth’s lunch counter in 1960. Inspiring a new generation of civil rights activists he worked with Martin Luther King Jr. and for decades, has supported campaigns for labor rights and remains one of the most important social justice leaders of our time. Joined by Kent Wong, social activist and director of UCLA Labor Center, both will discuss their new book Nonviolence and Social Movements: The Teachings of Rev. James M. Lawson, Jr. A book signing with complimentary coffee, tea and cookies will follow the discussion. This event is free on a first come first served ticket basis. Admission to the Hammer is also free.

22. Throwback Thursdays Screening of The Jerk

The Dog Cafe, situated in Silver Lake, will have their grand opening celebration this Thursday. What’s a Dog Cafe? It’s a coffee shop where adoptable four legged friends roam around for your cuddling pleasure!

26. Pop-Up Magazine at the Theatre at the Ace Hotel

Pop-Up Magazine is a live magazine, created for the stage and performed in front of an audience. Some of the country’s most interesting creators from filmmakers, comedians to radio producers are set to perform. There’s also a big party after the show!

For Casa Vega’s 60th year, guests can take advantage of their Throwback Thursday “Tacos & Tequila” promotion every Thursday until June 1st. Here’s how it works, order founder Ray Vega’s namesake margarita “The Boss” and you automatically get access to a 60¢ “taco-back” Grilled Chicken Taco. “The Boss” margarita is made with Patron Silver Tequila, Patron Citronage, Grand Marnier, and Fresh Lime it cost $13.50.

Earth Month Los Angeles kicks off its second year with an exhibit on Olvera Street in the DTLA – EMLA 2016 will showcase photographs of indigenous and tribal lands, national parks and more. The exhibit, co-sponsored by Western National Parks Association, G2 Gallery and El Pueblo de Los Angeles Historical Monument, opens on April 7th with a celebratory reception at 6:00pm with wine and appetizers offered. This event is free to the public.

31. The Wizarding World of Harry Potter Open’s at Universal Studios

The new Harry Potter themed attraction is finally here. Featuring a signature ‘Harry Potter and the Forbidden Journey’ 3-D adventure, a Flight of the Hippogriff roller coaster plus a massive Hogwarts Castle recreation for visitors to explore, needless to say opening day will be very crowded.

33. Skirball Cultural Center Presents: Take Me Out to the Movies

The Skirball Cultural Center is highlighting their newest exhibition by kicking off a summer-long movie series with America’s pastime on center stage. It’s called Take Me Out to the Movies. Four family friendly classic baseball films screened over the course of 5 months, starting with The Sandlot on April 8. Each screening guests will enjoy DJ’d music, ballpark themed snacks like cracker jacks and hot dogs, plus full access to the Skirball galleries to explore Chasing Dreams, a celebration of baseball that highlights the role of the game’s biggest cultural influencers through a showcase of over 130 artifacts, original films, and interactive experiences. Discount tickets for The Sandlot screening can be found via Goldstar.

From Ella and Dizzy to Holiday and Sinatra and beyond, celebrate National Jazz Appreciation Month in April with a lineup of fantastic tributes to all the greats. Broadway in Leimert Park will run April 1-24. Get more information and discount tickets via Goldstar.

Spend a magical weekend aboard the Queen Mary April 8-10. Salons and decks of the ship will be transformed into the Hocus Pocus Parlour & Pub, Abracadabra Café, The Secret Circle Study and more. Activities include: a magic mixology, mysteries of magic dinner show, plus a haunted after-hours tour. We spotted some discounted tickets via Goldstar for Saturday and Sunday.

Award winning Chef Laurent Quenioux is hosting a weekly pop-up at Sangers and Joe, in Pasadena. Stop by every Friday and Saturday until the end of April and treat yourself to an incredible raw bar, Quenioux’s acclaimed cheese cart, and much more. We tasted items on the raw bar menu with 20 plus top notch selections that included cherry stone clams, abalone and geoduck -this is a real treat for seafood lovers in Los Angeles. See our seafood platter here. Walk-ins are welcome but make a reservation if you want to be seated at a desired time.

The Completely Different Late Show is a hilarious improv show by the cast of the Groundlings’ Main Company. Audience shout suggestions throughout the night for improvisational scenes performed by some of the best in the business. It’s also a testing ground for brand new material for the Groundlings’ main show. Get more information and discount tickets via Goldstar.