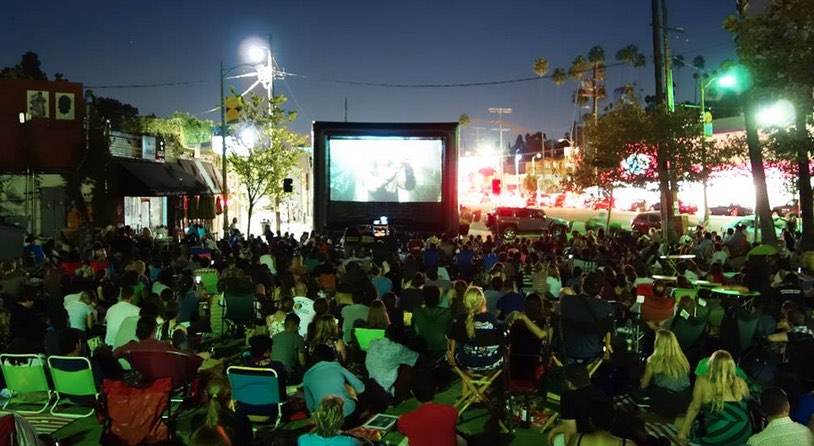 Head to Santa Monica to the gorgeous Victorian to see top comedy headliners for free! This month Andy Dick and Theo Von will take the stage at 7:30 p.m. Come early and enjoy some food and drink specials before the show!

The eighth annual L.A. Beer Week kicked off over the weekend. Check out our L.A. Beer Week line up featuring beer centric events happening from June 18 through June 26!

Come on out to Angel City Brewery in DTLA’s Arts District as they host one epic game night that includes 15+ Board Games, 8+ beers on tap, a 3-round cornhole Tournament and one geeky host.

The Hollywood Fringe Festival (June 9-26) offers over 1,500 performances in various spaces across the city. Come for comedy, drama, cabaret, dance and more.

6. Moonlight Movies on the Beach

The Moonlight Movies on the Beach series is back for 2016 with a full summer of free screenings taking place at Granada Beach in Belmont Shore. Kicking off the series is Pirates of the Caribbean – The Cruse of the Black Pearl.

Grab your dancing shoes and jam on at the Skirball Cultural Center’s celebration, Make Music Day, a FREE festival of music held every June 21 in more than 700 cities in 120 countries around the world. Kids and adults are welcome and all activities are free with admission!

Smith Park and Vincent Lugo Park in the SGV will be offering several free family friendley programs at both city parks. Taking place Tuesdays at Smith Park and Wednesdays at Vincent Lugo Park, starting at 6 p.m. kids can come play a human version of “Hungry, Hungry Hippos”, learn to make balloon animals and more. Parks After Dark will kick off June 21 and run through August 3.

The music series feature world music and dance performances celebrating the human connection to nature and gardens. Bring a picnic or purchase from Patina, this is a great family-friendly event in a gorgeous setting. World Rhythms will run every Tuesday from June 7 to July 26 from 6-7 p.m.

The Los Angeles Conservancy’s classic film screening series Last Remaining Seats returns to DTLA this week with a month-long set of events showcasing our most historic movie venues in town. This week they will be screening Double Indemnity (1944) at The Theatre at Ace Hotel (1927).

Picture you’re trapped inside a 1940’s film noir where you have to solve a slew of mysteries to escape by working with your fellow detectives as you race against the clock. Do you have what it takes? Head over to Escape Room LA and test your sleuthing skills. Get more information and discounted tickets for this week via Goldstar.

LA Design Festival is in full swing with citywide celebrations of the creative talents in our city. This Wednesday there will be a self guided tour highlighting three DTLA spots each known for their design: Otium, Mast Brothers DTLA and The Spirit Guild. FYI Silver Lake focused events are Thursday check the website for a full schedule!

Walk down Pine Avenue and sample a variety of food and drinks from various restaurants from Downtown Long Beach. It’s free to attend and you can participate in the tastings by purchasing booklets of 12 tickets for $10 each.

2o. The Crest Celebrates the 110th Birthday of Billy Wilder with Screening of Double Indemnity

The Crest in Westwood will screen Wilder’s Film Noir masterpiece Double Indemnity with birthday cake served following the film in the theater Lobby.

22. Shakespeare by the Sea

The summer season of Shakespeare By The Sea is in full swing with a free performance of Othello ay Point Fermin Park.

23. The Silver Lake Picture Show is Back

Back now for its fifth year, The Silver Lake Picture Show is a free, summer-long community series that screens popular films in a picnic-like setting at Sunset Triangle Plaza. The series begins this Thursday with a screening of Raiders of the Lost Ark.

Arts District gallery Hauser Wirth & Schimmel will be offering a brand new ‘After 5’ weekly music series all summer long. Guests will be able to enjoy a mix of live bands and DJ sets, craft cocktails from The Spare Room, plus Russian hand-pies from the Airstream kitchen of Pirozhki LA. Guest will also be given access to the ARTBOOK bookstore and all current exhibitions.

The Grove together with Who What Wear are putting on a free movie screening under the stars every Thursday during the summer. Screening this week is Pretty in Pink. Enjoy DJs, themed cocktails and a photo booth. Snag free valet parking by donating a book to Baby2Baby.

The El Capitan Theatre presents a special engagement of Finding Dory (June 17 – August 7). Before the movie, The Bubble Guy will form bubbles beyond the imagination in a breathtaking bubble extravaganza live on stage! Get more information and discount tickets via Goldstar.

Imagine this… you are locked inside a mysterious laboratory of an ancient alchemist where you’ll have one hour to uncover the hidden power of the Philosopher’s Stone in order to escape the room. Sounds like your kind of event?  Visit Escape Room L.A. and bring your A game this escape room requires critical thinking, creativity and plenty of teamwork. Get more information and discount tickets via Goldstar.

28. Throwback Thursdays Screening of The Adventures of Priscilla, Queen of the Desert

Escape Room LA invites you to get trapped inside a creepy theater haunted by a ghost. The only way out is to uncover clues and puzzles that will lead you to create a magical spell and release the ghost before time runs out. If you fail you will be trapped in the theater forever. Game? For more information and discount tickets  this week check out Goldstar.

30. The Unauthorized Musical Parody of The Big Lebowski

Watch the Coen Brothers’ classic comedy The Big Lebowski in musical form now through July 22 at The Rockwell Table & Stage. Get more information and discount tickets for Thursday and Friday via Goldstar.

New Amsterdam Vodka has teamed up with local street artist Moncho1929 for It’s Your Town a celebration of the vibrant culture and people of Los Angeles. The artist has created seven pieces of original art specifically for this event, including a massive mural in West Hollywood. Preview the art and meet Moncho1929 at this event, free and open to the public (ages 21+). Sip on custom LA-inspired cocktails too like the ‘DAM Good Mule,’ crafted by New Amsterdam Vodka.

San Gabriel Summer Nights is a free community event taking place at several popular locations in the city. This week the program will host a screening of Cinderella (2015 version) at Vincent Lugo Park.

Learn to ferment your own sodas! In this class you will create you own gingerbug base for soda and a fruit shrub. Supplies will be provided and guest will leave with their own mason jars of soda and shrub. Class cost $15.

Moby will chat with KCRW’s Jason Bentley and there will be a book signing and Q & A following the talk at the Skirball Cultural Center this Friday from 8 – 11 p.m. Tickets are $5 or $30 for admission and a book.

Westfield Fashion Square in Sherman Oaks will host five weeks of free outdoor movie screenings. Kicking off the series is a screening of Star Wars: The Force Awakens with costume characters and The Sidewalk Astronomers on hand for pre movie entertainment.

Ever tempted to put your hands on a work of art while in a museum? Will the folks over at Cantor Fine Art will help satisfy that urge through a new exhibition called ‘Please Touch the Art.’ a tactile art show where everything is meant to be touched. The show will feature artists from across the globe, including funky drippy sculptures from Dan Lam, an augmented reality sandbox from UCLA and 20 other artists and works! The show is free and runs from 6-9 p.m.

44. Degrees of Perfect Art Party at The Container Yard

Degrees of Perfect is a unique art party featuring five 8’ X 20’ murals created by street artists: Bacon, Dodo Ose, 123Klan, Slick and Zek One. Each using thermochromic paint on their murals the art will activate and transform as it’s surroundings heat up and cool down. Toro Y Moi will do a DJ set, a cash bar will be on hand as well as several food trucks.