This week includes a Labor Day pool party, free ice cream, the final Twilight Concert of the summer, the Downtown Art Walk, The Original Lobster Fest, and plenty more events to choose from. 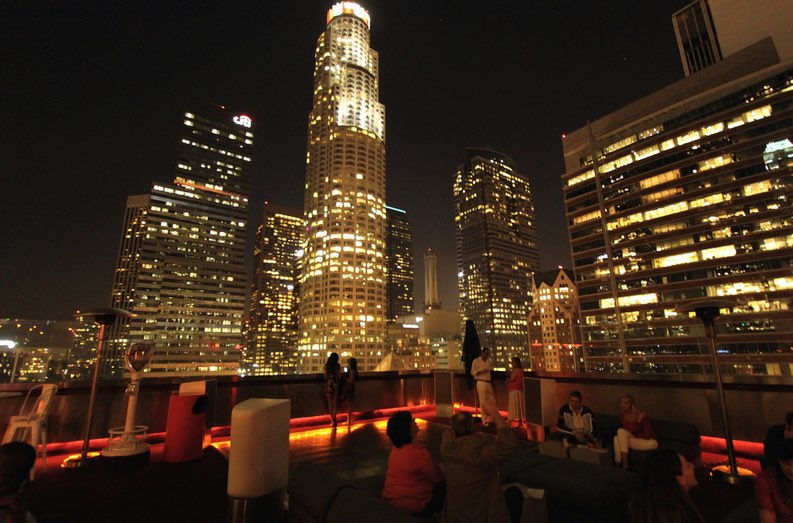 Rooftop bar at The Standard in DTLA. Credit: Prayitno via flickr

In collaboration with Alhambra’s most famous ice cream shop Fosselman’s, Dog Haus will be offering free soft serve cones at all of their locations on Labor Day, September 7.

Local fashion brand the Well and Steve Aoki’s music label Dim Mak is having a party! The casbah chic pool deck at the Hotel Figueroa is the place to be for fashion trendsetters and music mavens. Grab some food at their taco bar, down some $5 PBRs and take a dip in the heated pool.

Bar ONE in NOHO is taking Hoppy Hour to another level with FREE pizza Monday through Friday from open to 9:00pm. Take advantage of $7 beer flights, $1 off craft draft and wine, $4 sake bombs and $5 off bottles of wine. If my calculations are right you can have free pizza for breakfast, lunch and dinner… I guess that’s where I’ll be all week.

Latin-inspired restaurant Bow & Truss will launch a wine and cheese event series on Labor Day and will continue every first Monday of each month until November. The Wine & Cheese Night will feature a special wine and cheese tasting with wine expert Chuck Novak guiding guest through the experience.

The annual South Bay ritual known as Fiesta Hermosa will bring over 300 over 300 artists, crafters, painters, photographers, ceramicists, jewelers, and sculptors to downtown Hermosa Beach over Labor Day weekend (September 5-7) in a celebration to mark the end of summer that includes live music and a food court with more than a dozen vendors to choose from.

Discover the newest anime from Japan, coolest bands from the Pacific Rim, latest Harajuku fashion and some very disturbing horror films at the Pacific Media Expo created by the founder of the Anime Expo. More information and discount tickets can be found via Goldstar.

Reggie Watts and his band Karen play two sets at the El Cid while friends THIEVES warm up the crowed! Admission is just $10.

The popular screening series that has already held court in London and New York is now here in Los Angeles! For each screening of the Rooftop Film Club series organizers will set up rows of lawn chairs on the roof of the Ricardo Montalbán Theatre and provide headphones for each attendee. Doors open at 6:00pm with screenings starting at 8:00pm. Kicking off the week of screenings is Breakfast At Tiffany’s on Tuesday, Ghostbusters on Wednesday, JAWS on Thursday and The Goonies on Friday.

In support of Ovation TV acquiring the much-loved Joss Whedon show Firefly there will be a free screening of the series pilot on Wednesday at 7:00pm at Pulp Fiction Comics  located at 1742 Clark Ave, Long Beach, CA 90815.

Over the week of September 9-15 you can catch a sneak peak of the fall’s most anticipated new shows during screenings at the Paley Center for Media in Beverly Hills. Get more information and discount tickets (while supplies last) via our friends at Goldstar.

30 years later Fast Times at Ridgemont High is still one of the best comedies out there. Throw back Thursdays will be screening the flick and a gourmet food truck will be on-site with edibles tied to that night’s film. Guest are encouraged to bring their purchased food into the auditorium before the screening and enjoy a playlist of specifically curated music to match that night’s film. Grab some discounted tickets while they last via Goldstar.

The Downtown Art Walk has been an L.A. cultural phenomenon bringing in art enthusiasts and locals together every second Thursday of each month. Art galleries, shops, bars and more open up for one big party celebrating art and DTLA for one fine night. For September the Art Walk will dedicate the month to “Diversity” – in all of it’s shapes, contexts, creeds, and meanings.
Participating galleries for this Art Walk will include: DAC Gallery, These Days, Gloria Delson Contemporary Arts Gallery, Carol Cirillo Stanley Studio Gallery, The Spring Arts Collective, and the LA Fashion District.

Presented by TrueCar the Twilight Summer Concert Series is closing out the summer with performances by Tune – Yards and Avid Dancer. Happening on the Santa Monica pier this event is free open to all ages.

23. HARD Presents A Night at Fairplex

HARD will put on an electric show at the LA County Fair for one-night and will take over two-stages. Headliners include DVBBS, Juicy J, Destructo, AC Slater and more. Tickets to the festival will include free admission to the fair during the day.

All summer long every Thursday night from 6:00pm to 11:00pm in the Playhouse District of Old Town Pasadena, join a crowd of locals gathering for live music and food trucks. This week brings the Grilled Cheese and Lobsta truck to Old Town. Get more info on the official Facebook page for the event.

On Thursday, September 10 from 2 – 6 pm, the Coffee Bean & Tea Leaf invites you to sip and sample any 12 oz. fall beverage for just $2. New fall flavors include Salted Butterscotch, classic Pumpkin, and Pumpkin Chai flavors served up as a latte or Ice Blended® . Check participating store locations to take advantage of this day.

Few events combine live music, art, agricultural attractions, farm exhibits, and more fried food than your arteries can handle, but it’s all part of the LA County Fair, running until September 27. More information and discounted tickets can be found via Goldstar.