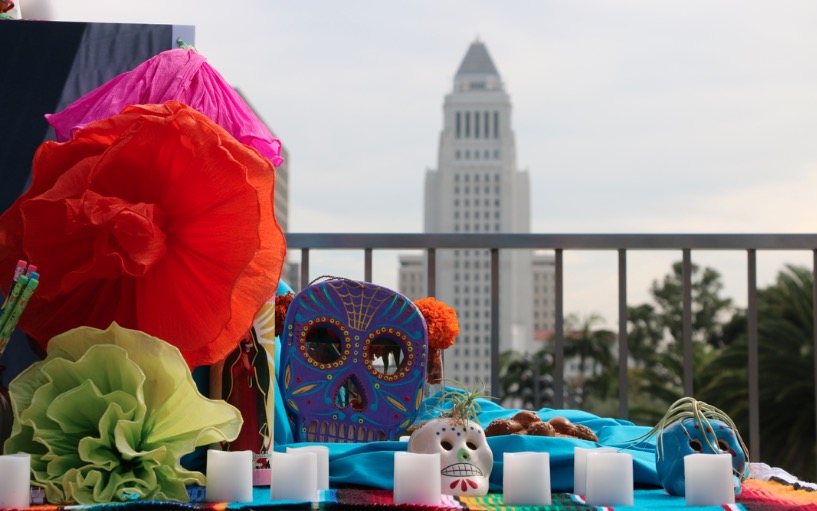 1. ‘Romance Resurrected’ at the Museum of Broken Relationships is a fun, festive, and (just a little) frightful way to kick off your Halloween weekend in Los Angeles. Co-hosted by the fine folks at We Like L.A. (hey, that’s us!), the shindig will feature drinks, dancing, and plenty of ways to explore the terrifying mysteries of this thing called love.

2. Old Pasadena Day of the Dead Weekend starts this Friday. The event features three days of music, activities, and a self-guided Tour of Altars, featuring both traditional and contemporary Day of the Dead altars (Oct. 27-29)

3. Way back on October 27, 1917, Grand Central Market opened its doors to Angelenos. Still in operation and more vital than ever, the Market now celebrates 100 years in business on Friday with a daylong celebration. The 100th Birthday Bash will feature vendors serving items inspired by the food hall’s history. Hear live music inspired by different times in the Market’s history, along with a vintage photo booth, costume contest and more.

6. The undisputed king of comics, Stan Lee is returning to L.A. for his 6th annual Comic Con at the L.A. Convention Center. Hosted on October 27-29, this annual event is a pop culture haven for comic, video game, fantasy and multi-media fans.

9. Immerse yourself in the beauty of the Arts and Crafts movement during the 26th Annual Craftsman Weekend, taking place in Pasadena on October 26-29.

10. Eat|See|Hear returns with Front Porch Cinema, a free movie night below the stars every Friday on Santa Monica Pier from September 29 through October 27. The fall film series will also feature music, drinks, and bites before each screening. This week they’ll conclude with a screening of “Rogue Elements” presented by REI. FREE

11. After multiple sold-out performances in New York, Boston and Los Angeles, Feathers of Fire: A Persian Epic will make its debut at The Wallis in Beverly Hills. Feathers of Fire is a dazzling show of shadow puppetry “live animation” of a 10th-century book of Persian poetry played out on a cinema-size screen. Check for discounted tickets before making your purchase. DISCOUNTED (via Goldstar)

12. Head over to Torrance for one of the most well-known Oktoberfest celebrations in the L.A. area! Alpine Village Oktoberfest runs September 8 through October 28 every Friday, Saturday and Sunday. Enjoy traditional Bavarian food, beer, dancing, and more.

13. The Sivley family is back for their 46th year of hosting the award winning, Beware the Dark Realm a haunted house experience in the city of Santa Clarita. Haunt kicks off this Satruday and will run every Friday and Saturday thorough the month. FREE

14. Knott’s Scary Farm is back with their signature haunted attractions, mazes and thousands of monsters ready to scare the living day light out of you and your crew. Be sure to check for discount tickets before making your purchase. DISCOUNTED (via Goldstar)

15. California Market Center in Downtown Los Angeles’ Garment District, will open its doors to the public for a big sample sale this Friday. Score fantastic bargains on current styles for women, men and kids. Keep in mind that most showrooms accept cash only, and that you’ll want to bring your own bags.

16. Get ready to shriek, because Urban Death: Tour of Terror is back at Zombie Joe’s Underground Theatre Group in North Hollywood. This haunted theater attraction features a terrifying performance and a maze of inexplicable horrors, unfathomable monstrosities, and the disturbing spirits that walk among us. Happening every Friday and Saturday this month. Check for discount tickets before making your purchase. DISCOUNTED (via Goldstar)

17. Silent Classic Horror Festival will host a month long fright fest. This week the 1925 film Phantom of the Opera will be screened at Old Town Music Hall located in El Segundo. The festival takes place every Friday through Sunday.

18. Climb aboard the 17th Annual Ghost Train in Griffith Park on October 13-31 and ride on their iconic train into a spooky setting of animatronics, projections and pyrotechnic. The ride is family friendly with no blood, gore or actors jumping out to scare you like most Halloween experiences.

19. 260 Sample Sale LA returns with a Paul Smith sample sale at their Beverly Hills store October 25-29. Offering up to %75 off of women’s and men’s clothing, accessories and shoes.

21. Checkout The Nightmare Before Christmas with 4-D Effects at El Capitan Theatre in Hollywood October 20-31. Check for discount tickets before making your purchase. Happening all weekend long. DISCOUNTED (via Goldstar)

22. The First-Ever Growlers Six Music Festival happening on October 28-29 at the Port of Los Angeles will feature acts like the Yeah Yeah Yeahs, Modest Mouse, The Growlers, The B-52s, Girl Talk and more.

24. KCRW’S Masquerade Ball is back from the dead and headed for The MacArthur! Lucent Dossier, Lucha Vavoom, and belly-dancing flappers Les Petites Bonbons are just a few of the high-profile acts performing at the ball.

29. In honor of Halloween, visit the Huntington in San Marino for Drama After Dark: A Night of the Macabre with Poe & Gorey this Saturday. Watch an enactment of creepy works on the moonlit grounds of the Huntington like “The Tell-Tale Heart,” “The Gashlycrumb Tinies,” and more.

30. The 14th Annual Halloween and Mourning Tours at Heritage Square Museum returns for two days of all things mourning such as a tour of the Undertaker’s home, a seance, coffin making, a Victorian mummy unwrapping party to name a few.

31. Theatricum Botanicum will transform itself into a haunted Halloween extravaganza with various activities and entertainment. Highlights include ghost stories, game booths, themed food and libations, live music and performances by zombie thespians and improv groups.

32. TAO Group’s CARNAL CARNIVAL is a fully immersive Halloween extravaganza with circus characters, an exotic zoo, a neon fun house, DJ’s and Snoop Dogg. Guests will have access to several locations including The Highlight Room atop DREAM Hollywood and Avenue Los Angeles.

33. The 5th Annual Santa Monica Zombie Crawl will bring hundreds of wannabe zombies to the heart of the west side for a night of terror, partying, dancing and drink specials from many city establishments. The night will end with a party at 1212 on the promenade.

37. Grab your pooch and head to Angel City Brewery in DTLA this Saturday for the brewery’s Howl-O-Ween event. The dog-friendly afternoon will feature a dog costume contest, adoptions, dog treats and much more.

38. Chicas Tacos and Boomtown Brewery are teaming up for a deadly 1920’s Hollywood soiree. The night will feature Cocktails from the Crypt, Bewitching Burlesque, DJs of the Damned, an immersive crime solving game and more.

39. The Los Angeles Haunted Hayride continues at The Old Zoo in Griffith Park through October 31. This years theme is “Clown” and features four different freaky zones, a slew of demonic clowns, a corn maze and more.

40. Hundreds of Corgis will gather this Saturday for SoCal Corgi Beach Day at Huntington Beach. All dogs are allowed to come to the fall beach day!

41. Wicked Lit  is a spooky immersive theatre experience taking horror literature and turning them into plays at the Mountain View Mausoleum & Cemetery. It happens every Thursday through Sunday from September 28 through November 9. Check for discounted tickets before making your purchase. DISCOUNTED (via Goldstar)

45. Boo at the L.A. Zoo returns for a spooktacular season. Highlights include a “Nocturnal Adventure” maze,  “Animals and Boo” creepy crawler encounters, pumpkin-carving demos and other family-oriented fun.

46. LAVA (the Los Angeles Visionaries Association) will host a free tour of civic art in Los Angeles’ civic center. There will be an illustrated lecture focused on the rich architectural legacy of Downtown L.A.‘s civic center and a group walk to visit a number of historic and more recent civic artworks. FREE

47. The Eagle Rock Bark Halloween Block Party and Kittie and Doggie Rescue Adoption comes to Eagle Rock City Hall on Sunday for the cutest Halloween-themed event all for a furry cause. FREE

48. There’s an All-Star Cookout happening at Mack Sennet Studios in Silver Lake this Sunday. Expect chefs like Jonathan Yao of Kato, Erwin Tjahyadi of Bone Kettle and Avner Levi of Cento Pasta Bar to grill up some good eats right before your very eyes.

50. Enjoy a bit of spooky family fun at  Mr. Bones Pumpkin Patch. The patch is open daily with an additional “Boo-tique” pop-up near by at Platform LA in Culver City.

52. The Queen Mary’s Dark Harbor will transform into a seaport of the damned for the Halloween season with terrifying mazes and monsters at every turn like the Iron Master and Graceful Gale. This year they’ll reveal their newest member of the crew, his name is Chef and he’s got a carnivorous kitchen staff with a big appetite. Happening Thursdays and through Sundays. DISCOUNTED (via Goldstar)

53. Do you think your dog has the best Halloween costume? Enter your for legged friend in the 17th Annual Haute Dog Howl’oween Parade at Marina Vista Park in Long Beach! Expect over 500 pups during this popular annual parade through Belmont Shore.

54. There’s a Great Pumpkin Hunt happening at the South Coast Botanic Garden from October 1 through November 30 everyday from 9 a.m. to 5 p.m. Highlights include an imaginative scavenger hunt, light hiking, a pumpkin shop and access to the gorgeous 87-acre grounds. Great for families. Halloween costumes are welcome.