This week includes a Echo in The Canyon on Monday, the LA Kings on home ice, The War on Drugs at the Greek, FREE Front Porch Cinema, a FREE YACHT Show at Amoeba, and plenty more to choose from. 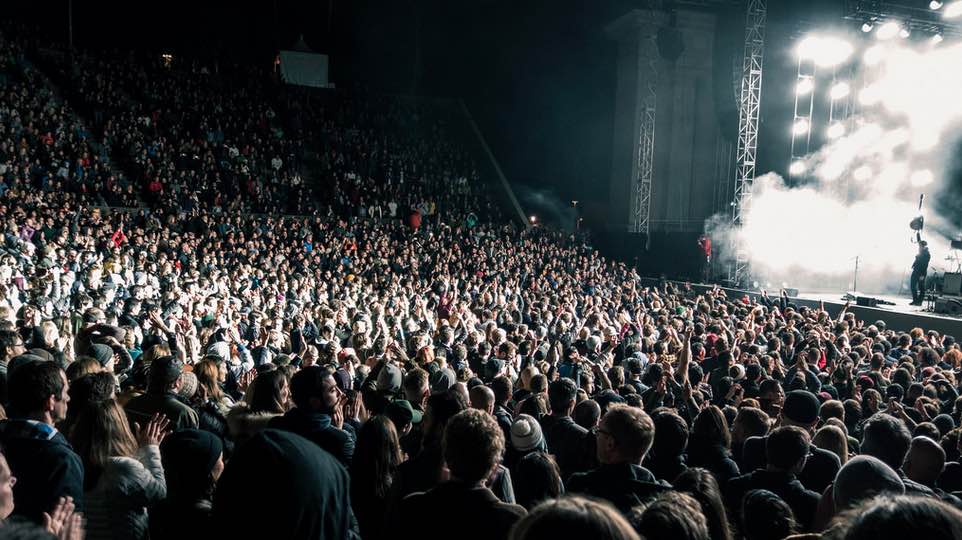 The National Perform at The Greek Theater in 2014. The War on Drugs will be there this Friday. Credit: Matt Biddulph via flickr

1. Echo In The Canyon

The Echo in The Canyon show will feature Beck, Fiona Apple, Jakob Dylan, Cat Power, Regina Spektor and Jade (formerly of Edward Sharpe and the Magnetic Zeroes) performing the music of the Byrds, the Beach Boys, Buffalo Springfield, the Mamas & the Papas, Love & The Association and more, all playing at the Orpheum Theatre. Tickets are going fast, as the first show time (7:30pm) has already sold out BUT a second time slot has been added for 10:30pm.

To celebrate their five year anniversary, Olio is pricing their hand-tossed, wood-fired, margherita pies for $5 all month long. The deal goes for both the West Third and Grand Central Market locations. The only catch is there’s a limit of one pizza per guest per day.

For the month of October, Hinoki & the Bird will be hosting the Travel-Inspired Guest Chef series featuring Chef Perfecto Rocher (formerly of smoke.oil.salt.). Every Monday of this month Perfecto will curate a 5-course Spanish tasting menu inspired by his recent travels to Spain. The meal cost $85 per person.

5. Hot Tub With Kurt and Kristen

An immersive,  one-of-a-kind musical production of the classic Stephen King tale of bullying, cruelty, and revenge. Now playing at the historic Los Angeles Theater. Performances all week and weekend long. Discount tickets and more information available via our friends at Goldstar.

7. The Ancient Forest At Descanso Gardens

Just a quick reminder that the LA Kings are back on the ice for the 2015-2016 season and you can catch them in action this Tuesday against the Vancouver Canucks. Grab discount tickets to the game via our friends at Goldstar starting at just $10.

A debate viewing and comedy event happening at the Ace Theatre, a panel of comedians will provide commentary on the Democratic debate. Join Tim Heidecker, Douggpound, Eliza Skinner, Brent Weinback, the Lucas Bros and Brendon Walsh as they all weigh in on a slightly delayed broadcast of the live debate. Afterwards, head to the lobby for a party and voter registration drive.

Through demonstrations and tastings, explore the technique, history, and culture of pickling with Kevin West. A journalist and author Kevin, is the creative director of Grand Central Market and has given guest lectures and demonstrations at institutions and museums throughout the city. Registration cost is $35.

Happening the 13th through the 22nd, the Screamfest Horror Film Festival is the largest and longest running film festival for horror in the U.S. Paranormal Activity was discovered in 2007 here since then the festival has been called the “Sundance of Horror.”

LACMA will screen Ghost of Frankenstein. This ongoing  Tuesday Matinee film series cost $2 for members and $4 for non members.

Tanzy Restaurant will launch a new Rosé and oyster promotion this Tuesday. For only $7, the restaurant will be offering diners a glass of St. Supery Rosé paired with four West Coast oysters every Tuesday from 11:00am to 10:00pm.

The Japanese American National Museum is hosting the Giant Robot Biennale 4, its fourth exhibition in collaboration with Giant Robot founder, Eric Nakamura. This edition of the popular series, first presented in 2007, will examine the evolution of the Giant Robot aesthetic from its humble origins in drawing to its many celebrated manifestations in painting, installation, muralism, and photography. The show will run through January 24, 2016.

The popular screening series that has already held court in London and New York is now here in Los Angeles! For each screening of the Rooftop Film Club series organizers will set up rows of lawn chairs on the r oof of the Ricardo Montalbán Theatre and provide headphones for each attendee. Doors open at 6:00pm with screenings starting at 8:00pm. Kicking off the week of screenings is Breakfast At Tiffany’s on Tuesday, Guardians Of The Galaxy on Wednesday and Indiana Jones: Raiders Of The Lost Ark on Thursday.

In the spirit of Halloween, V Wine Room sommeliers will host a complimentary wine and candy pairing in the Andaz wine gallery from 5:00pm-7:00pm. No tricks, just treats. Sip, mingle, and learn how to perfectly pair caramel apples, delectable chocolates, and more with unique California grown wines. Tastings are available for guests and locals 21+. Valet parking is available for $7 with validation.

The Bootleg Theatre in Echo Park is offering one hour long FREE yoga classes with Kali Yoga every Wednesday and Sunday at 11:00AM all October long. Updates,schedules and an indie rock instrumental playlist for the classes can be found on their Facebook event page.

Can you believe it’s been 10 years since Bella and Edward first appeared in print? Twilight author Stephaie Meyer will be at The Last Bookstore this Wednesday for a special Q&A + ticketed book signing to commemorate the 10-year anniversary of her best-selling young adult fiction book.

26. Shuck It Thursdays At Bow & Truss

On Thursdays Latin inspired Bow & Truss in NOHO is offering $1 oysters from 5:00pm until they run out. Live music also starts at 8:00pm on the patio.

Attention pumpkin carving enthusiasts! The Rise of the Jack-O’-Lantern Festival features more than 5,000 hand-carved illuminated jack o’lanterns created by professional artists and sculptors arranged in creative ways along a 1/3-mile scenic walking trail all set to an original music score. In 2015 there are two L.A. locations where you can enjoy The Rise, at either Descanso Gardens or Santa Anita Park.

To celebrate public safety professionals, DTLA is throwing a BBQ with a live band, prize giveaways and of course plenty of grilled meats! Taking place this Thursday from 11:30am-1:30pm at the Bank of America Plaza in DTLA. The menu includes roast tri-tip Santa Maria style and BBQ Chicken.Vegetarian option will also be available like teriyaki grilled portobellos. The event is free for sworn public safety personnel in uniform and $10 for general admission and $5 for children 10 and under.

YACHT will be performing a free set at Amoeba Music in Hollywood this Thursday in support of their latest album,  I Thought The Future Would Be Cooler. Things get started at 6:00pm.

The Santa Monica Pier presents Front Porch Cinema, a free movie night under the stars taking place every Friday during the month of October. Unwind on old-timey lawn chairs and watch oceanfront films on a giant inflatable screen, this week the featured presentation is The Imitation Game. The Cinema Lounge will open at 6:00pm and the movie begins at 7:30pm.

34. The War on Drugs at The Greek (Discount Tix)

Catch indie rock sensation The War on Drugs along with special guest Christopher Owens this Friday evening at the historic Greek Theater. Show starts at 7:30pm, and you can grab still grab discount tickets (while supplies last) starting at $20 via our friends at Goldstar.

The Fairplex transform into a German playground for Oktoberfest every Friday and Saturday of this month. Expect Bavarian music, chicken dancing, bratwurst and pretzels while knocking back some authentic German beers. Entry is only $5.