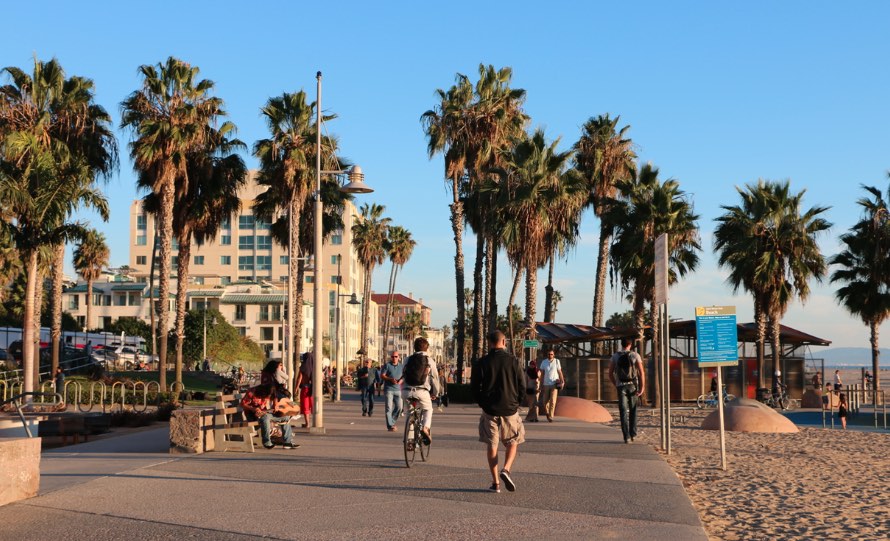 1. Check out Lost and Found LA, a pop-up art installation in La Tuna Canyon from the artists who brought you the Griffith Park Teahouse. The work adorns the canyon’s charred trees with a natural gold material, illuminating the damage and embracing the flaws left by the fires, which burned through over 7,000 acres through the Verdugo Mountains this past September. FREE

2. Life & Thyme and Office Party present Over Coffee, a monthly panel discussion centered around food, hospitality, creativity and social issues. This month they’ll be sitting down with Chefs Ray Garcia of Broken Spanish and Carlos Salgado of Taco Maria to discuss the next-generation of Mexican food. FREE

3. Get into the winter spirit when ICE at Santa Monica returns with a 8,000 square foot ice skating rink. Running November 1 through January 5.

7. Every Monday is Karaoke night at Culver City Korean BBQ spot Hanjip. Sing your heart out from from 6-10 p.m while enjoying AYCE Korean BBQ.

8. Spamilton a parody that celebrates and roasts the Broadway musical will make its West Coast premiere at the Kirk Douglas Theatre in Culver City. Happening all week. DISCOUNTED (via Goldstar)

9. Watch Doctor Who with your fellow Whovians this Tuesday night at Fox & Hounds. They’ll be showing the Eleventh Doctor episode “The God Complex” on every TV as well as two big projectors inside and outside the bar. Drink special password is “TARDIS” and gets you $4 draft beer and $1 off wine and well drinks.

12. Mr. C Beverly Hills extends their popular Poolside Cinema series into fall every Tuesday evening, from October 10 through November 21. Visit the gorgeous yacht-inspired pool deck where you’ll ensconce yourself in a lounge chair for a film and elevated bites under the stars. The series continues with a screening of First Wives Club.

13. Down some tacos, drink some locally brewed beers and test your trivia skills this Tuesday during Tacos & Trivia night at Angel City Brewery in DTLA.

15. Kyle Dixon and Michael Stein, half of band Survive will perform The Music of Stranger Things live at The Theatre at Ace Hotel in DTLA. (via Goldstar)

16. Hammer presents a screening of Chasing Coral. A 2017 Sundance Audience Award winner, the film is focused on the vanishing coral reefs epidemic and the experts racing against the clock to save the vital underwater ecosystem. FREE

17. Steve Martin and Edie Brickell present Bright Star, Broadway’s newest musical hit at the Ahmanson. Inspired by true events, the musical tells a tale of love and redemption in the American South in the 1920s and ’40s. Performing all week. DISCOUNTED (via Goldstar)

19. 260 Sample Sale LA returns with a Rebecca Minkoff sample sale at their Beverly Hills store November 8-12. Offering up to %75 off of women’s clothing accessories and shoes.

21.  KCRW’s Left, Right & Center goes live at the Ace Hotel in DTLA. Host Josh Barro will lead a panel as they look back at a year since the election of President Donald Trump in 2016 with a side of comedy.

23. Reformation will host a three day sample sale at Platform LA in Culver City from November 9-12.

24. VegFest heads to USC this Thursday, the vegetarian and vegan festival will include free food from a number of food trucks, carnival games, a bounce house, sustainability booths and more. FREE

26. The Actors Gang in Culver City will open their season with Captain Greedy’s Carnival, a musical satire mocking greed, humbug, corruption and predatory capitalism. Follow the story of four innocents who get tricked by a legendary con man. From there on they’ll encounter freaks, illusion, terrifying exhibitions and more. Happening Thursday and Friday. DISCOUNTED (via Goldstar)

27. Downtown Art Walk brings art enthusiasts and locals together every second Thursday of each month to take part in gallery tours, shop the art mart and sample nearby food trucks, and experience the overall flavor of the downtown Los Angeles Historic Core.

28. Schutz shoes is having a four day sample sale (November 9-12) in West Hollywood.

30. Cole’s in Downtown L.A. turns 109 this year and to celebrate they’re hosting an anniversary gala dinner prepared by chefs Neal Fraser of Redbird and Christian Page of Cassell’s Hamburgers.

32. Join the Latin American Cinemateca of L.A. and The Consulate General Mexico of L.A. for the 30th Anniversary of Cheech Marin’s Born in East LA, as well as a panel discussion in response to the current immigration policies and threats. FREE

34. Night Dive at the Aquarium of the Pacific is an 18-and-over event featuring DJ sets, art, lectures, food trucks, bars and more.

35. Hangout with Bill Nye and filmmakers David Alvarado and Jason Sussberg as they screen a new documentary about everyones favorite science man. A Q and A will follow the screening.

36. Impro Theatre presents L.A. Noir UnScripted complete with a jazz trio and actors improvising score on the spot. Happening at The Edye at The Broad Stage. Happening all weekend. Check for discounted tickets before making your purchase. DISCOUNTED (via Goldstar)

37. The Groundlings: The Completely Different Late Show is a hilarious improv show by the cast of the Groundlings’ Main Company. Audience shout suggestions throughout the night for improvisational scenes performed by some of the best in the business. It’s also a testing ground for brand new material for the Groundlings’ main show. DISCOUNTED (via Goldstar)

38. There’s a Justice League fan art show happening at The Perky Nerd in Burbank this Friday.

39. There’s a one day Halston and Haute Hippie sample sale this Friday. Women’s ready-to-wear, evening-wear, handbags and footwear will be 70% off retail prices.

40. The 9th Annual Montebello Taste of the Town will showcase the Montebello food scene this Friday with unlimited food and drink samples.

41. LACMA’s award winning Department of Music Program provides hundreds of free concerts and musical events every year for Angelenos to enjoy. This Friday their jazz series continues at the BP Grand Entrance.