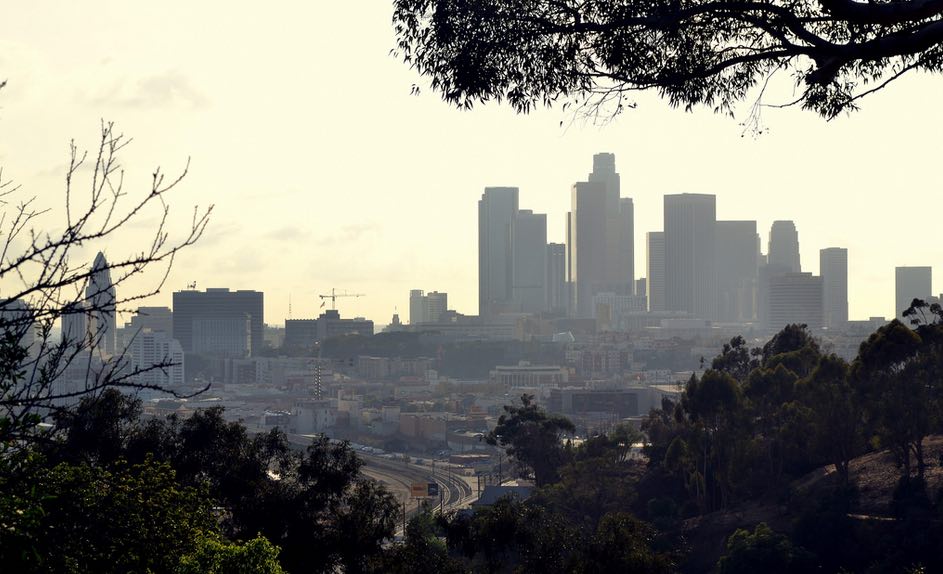 The LA Film Festival (which started June 10) runs with screenings until this Thursday June 18.

The Alcove is hosting their summer Dinner and a Movie series with Devil Wears Prada. Movie starts at 8:00pm, and it’s a first come, first seated type deal. Grab a cocktail at Big Bar, order some seasonal treats like their featured sliders grab a slice of cake and find a seat in their gorgeous garden patio. We will be there! Join us!

3. An Evening With Dr. Ruth

Everyone knows Dr. Ruth as the most famous sex therapist, but few people know she survived the Holocaust, was raised in an orphanage in Switzerland, and was even a sniper during Israel’s War of Independence. And at the age of eighty-seven, she is as spirited as ever! Join Dr. Ruth as she sheds light on how she’s learned to live a life filled with joie de vivre.

5. Hot Tub With Kurt An Kristen

On the third Tuesday of every month, admission is free at The Los Angeles County Arboretum. The arboretum boasts 127 acres of greenery, plus upwards of 200 species of birds, and a variety of specialized reserves with an aquatic garden, a tropical green house, an herb garden, and a rose garden.

Picture you’re trapped inside a 1940’s film noir where you have to solve a slew of mysteries to escape. Work with your fellow detectives as you race against the clock. Do you have what it takes? Test your sleuthing skills with half price tickets via Goldstar. Can’t make it on a Tuesday? There’s another Escape Room on Friday where you basically play Indiana Jones for a day and fight against time to get your hands on a lost civilization’s ancient treasures hundreds of feet below Downtown Los Angeles!

Whether you are for or against gentrification, what does it really mean for the city? Will a gentrified Los Angeles shift shape the city’s culture? And, will the growing fight over gentrification become the next hot-button political issue? Join experts in urban planning as they discuss how gentrification is changing and challenging Los Angeles this is a RSVP free event.

Named Time magazine’s No. 1 show of the year, Matilda the Musical is the story of an extraordinary little girl who dreams of a better life. Based on the novel by Roald Dahl and brought to lift by a brilliant team that includes Tony-winning director Matthew Warchus (God of Carnage) and Tony-winning playwright Dennis Kelly. Tickets for the show start at $75 but Goldstar has them starting at $52 now till Sunday.

Get a taste of Old Hollywood sip on classic cocktails as an awesome guide share history tidbits, celebrity stories and more on Urban Adventures tour of Historic Hollywood. Usually tickets are $79 but Goldstar is hooking people up with $47.40 tickets.

LATE ADDITION: Totally forgot about Bloomsday at the Hammer Museum, a celebration of the life of Irish writer James Joyce. Includes Guinness, Irish fare and live music by Rattle the Knee in the courtyard plus a dramatic reading in The Billy Wilder Theater. Event starts at 6:30pm and it’s FREE!

As part of related events all over the world, the Walt Disney Concert Hall welcomes young (but still accomplished) classical ensembles  including high school and college wind ensembles from Seal Beach and Riverside, California and the Saipan Southern High School Manta Ray Concert Band from Saipan. Get more information and discount tickets via Goldstar.

14. Steve Earle at The Canyon

Grammy Award winning Nashville recording artist Steve Earle (who you may know from his acting work on Treme and The Wire) comes to Los Angeles for a performance at The Canyon in Agoura Hills. Get more information and discount tickets via Goldstar.

Expect to see some of today’s best working comedians alongside a few young up-and-comers at one of the best live comedy shows in Los Angeles, The Super Serous show! Although the lineup changes each month, the creators of the show Mandee and Joel of CleftClips try to consistently create a intimate and magical atmosphere to have a laugh. This week’s line up has Micheal Che, Anthony Jeselnik, Pat Regan, and more hosted by Dave Ross with videos by Zach Kornfeld.

16. The Joie, Equipment, and Current/Elliott Sale

Now through Saturday, score up to 75% off effortless cali apparel during the cult-fave brands Joie, Equipment, and Current/Elliott warehouse sale at Siren Studios Orange.

End your day with a sunset cruise around the marina with a drink in your hand. You’ll also enjoy complimentary appetizers and a front-row seat for the sailboat races on the Marina. Get more information and discount tickets for the cruise via Goldstar.

From 11:00am – 5:00pm at The Ace Hotel Upstairs The Working Women’s Club will be hosting a all day gathering where ladies can come with their laptops, notebooks, sketch pads etc. and enjoy some good vibes, network, collaborate and check in with one another.

Every Wednesday night practice Vinyasa yoga on the rooftop of West Hollywood’s Palihouse. For $15 guests get to stretch out as the sun sets in this all level, music filled, fun flowing class.

Fashion site Who What Wear is hosting a series of free outdoor movie screenings on the lawn at The Grove every Thursday evening this month. This week they are screening Clueless. The event is free with RSVP and includes a post-screening party featuring DJs, themed cocktails, photo booths, and snacks.

Need some 70’s camp in your life? The cult classic Flash Gordon is screening this Thursday at Laemmle’s Royal Theater as part of a Throwback Thursday series. Movie starts at 7:30pm. Get more information and discount tickets via Goldstar.

Get free Lobsta Truck from 11:30am – 1:30pm in Sherman Oaks courtesy of the Wescom Kindness campaign.

There is a new lineup of free ‘San Gabriel Summer Nights’ street parties to be held each Thursday night till August 6. This week is a Thursday Throwback Concert at Vincent Lugo Park.

From 6:00pm to 8:00pm, Día de Campo will offer complimentary tastings of blanco, reposado, and añejo tequila for all diners.

27. Shakespeare By The Sea at Point Fermin Park

The summer season of Shakespeare By The Sea begins with a performance of As You Like It at Point Fermin Park in San Pedro. Three performances this week (Thursday, Friday, Saturday) and many more all summer long.

It’s grunion season! Cabrillo Marine Aquarium in San Pedro has three scheduled ‘Meet the Grunion’ events set for June/July. Each event includes an educational auditorium program and guided observation at the beach during the spawning. 8:00pm – 12:00pm. The cost is $5 for adult, non-members. And here’s the complete calendar of summer grunion runs.

Word on the street is that prices are as low as $5 at this sale, thats just insane! Get your shopping fix Thursday through Saturday 10:00am to 6:00pm.

Critics are calling Inside Out Pixar’s best film since Up (100% on Rotten Tomatoes so far, woot-woot). Catch a showing of the new release at El Capitan Theater that includes a live, pre-show dance performance and a screening of the short film Lava. Get more information and discount tickets to the screening via Goldstar.

Every June Grand Performances begins a summer-long concert series that brings Angelenos together with an eclectic mix of musical performances at a unique setting in Downtown L.A. The Gaslamp Killer Experience will be the first music group to kick things off for the season. The shows are 100% free to the public all summer long!

32. Tease, If You Please Burlesque Show

This super sexy and seductive burlesque show aims to transport you back to the golden age of striptease and Gypsy Rose Lee. Staged at Bar Fedora inside downtown L.A.’s Au Lac, Tease, If You Please spotlights acts from some of the most creative dancers in the business. Miss Donna Hood, who performed alongside the one-and-only Dita Von Teese in Strip, Strip, Hooray!, produces this thoroughly modern, vintage-style show, hosted by stand-up comic and famed little person Selene Luna. Get more information and tickets via Goldstar (prices starting at $15).

33. Free Screening of Earth to Echo at the Redondo Beach Pier

Put together by The Redondo Pier Association this weekly summer film screening occurs every Friday in June. This week: Earth to Echo. The Redondo Beach Pier movie screenings will take place at 100 Fisherman’s Wharf Redondo Beach 90277.

The Completely Different Late Show is a hilarious improv show by the cast of the Groundlings’ Main Company. Audience shout suggestions throughout the night for improvisational scenes performed by some of the best in the business. It’s also a testing ground for brand new material for the Groundlings’ main show. Get more information and discount tickets via Goldstar (prices starting at $6.50)

Get free Lobsta Truck from 11:30am – 1:30pm in Signal Hill courtesy of the Wescom Kindness campaign.

37. The Music Center Host Bring Your Own Dance Moves

The Music Center in Downtown Los Angeles is encouraging you to get your boogie on. Line dancing and two step will the be the theme of the event which include dance lessons, live band or DJ, and a open dance floor.

LACMA’s award winning Department of Music Program is a remarkable city resource, providing hundreds of free concerts and musical events every year for Angelenos to enjoy. This Friday they kick off their annual jazz series. The concerts will take place at the BP Grand Entrance.