This week, from Monday, July 2 to Friday, July 6, features Moonlight Movies on the Beach, Sizzling Summer Nights at The Autry, Harry Potter at Hollywood Bowl, All Space Considered, First Fridays and more as well as LOTS of things to do on the Fourth of July. 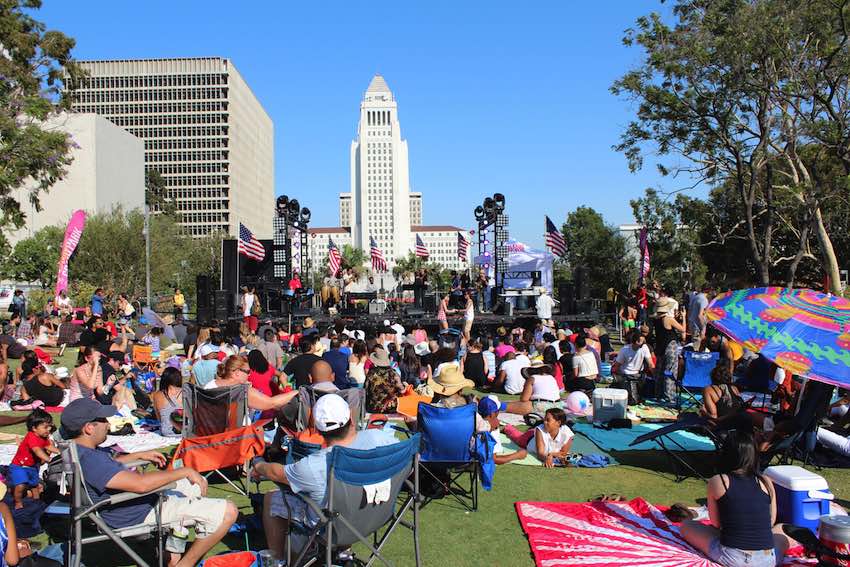 1. Start your week with a free Jam Session at the Ford Theatres. This week’s focus: Hip Hop Dance. FREE

2. Grand Park will host Big L.A. Portrait Gallery from June 7 to July 4, transforming itself into a nighttime art gallery featuring photos by Los Angeles-based artists.  Photography will be projected onto the 100 square-foot wall of the historic L.A. County Hall of Records right in front of Grand Park. Art will be on display nightly from sundown to midnight and is free to the public. FREE

3. There’s a free summer fitness series at Manhattan Beach Pier kicking off with Mindful Yoga on the Beach this Monday at 6:30 p.m. FREE

4. Bring a little meditation to your Monday at the Eastside/Hollywood Forever Cemetery Sitting Group

5. Hot Tub With Kurt And Kristen at The Virgil is one of the most popular weekly variety shows happening on a Monday in Los Angeles.

6. The exhibit “Satoyama: Evolving with the Forest” celebrates epicurean ecology through a collaboration between Michelin-starred chef and Japanese cooking pioneer Chef Yoshihiro Narisawa and leading food photographer, Sergio Coimbra. The food photography exhibition will feature many interactive moments including educational workshops throughout the till July 29, 2018.

7. Moonlight Movies on the Beach returns to Alfredo’s Beach Club in Long Beach a a summer of free film screenings on the sand. The series continues Tuesday with a screening of The Goonies at Granada Beach and Top Gun on Thursday at Alamitos Beach. FREE

8. Mr. C’s Poolside Cinema is back for the fifth year in a row. From June 5 through August 28 Angelenos can indulge in a luxury outdoor movie experience by the pool with a Cipriani menu, classic movie snacks and mini bottles of Moët & Chandon Champagne. Almost Famous will be screened this week.

9. There’s no better place to explore the history of our city than inside Becoming Los Angeles, the Natural History Museum’s newly revamped (and just reopened) exhibit that details the culture, events, geography, movements, art, and diverse peoples that have shaped the city of angels.

10. Zedd in the Park takes over Los Angeles State Historic Park for a day of music by Zedd, Medasin, Oliver Tree and Whethan. Food in the park includes Zedd’s Tacos, Pizzanista!, Afters Ice Cream and much more. Activities in the park include water ballon contest, corn hole and croquet.

11. E.P. & L.P. in West Hollywood continues their stylish cinema series Melrose Rooftop Theatre with several screenings this week that include Back to the Future 2, Singing in the Rain and more.

12. Celebrate the glories of Los Angeles art with Made in L.A. at the Hammer in Westwood. On view now till September 2, 2018. FREE

13. Need 4th of July plans? We’ve rounded up 25 Fun Things to do For the 4th July in Los Angeles including a block party at Grand Park, Americafest at the Rose Bowl, 4th of July fireworks at the Hollywood Bowl, and much more.

14. WP24 by Wolfgang Puck at The Ritz-Carlton in DTLA will host a Fourth of July BBQ at the exclusive private sky-high rooftop. Get a premium view of fireworks in the city and unlimited access to classic BBQ dishes and an over-the-top desserts spread, prepped by Chef John Lechleidner. Tickets cost $55 and advanced reservations are required by calling 213-743-8824.

15. Celebrate July Fourth at a Late Night BBQ Bash at the Long Beach Aquarium of the Pacific.

16. The Pomona Fairplex presents the 32nd Annual Kaboom! an evening of motocross, monster trucks, and a huge fireworks shows.

18. Old Pasadena Summer Cinema kicks off with a screening of There’s Something About Mary at CTRL Collective. The series brings free movie screenings to the Old Pasadena area at select venues from July 5 to 28. FREE

20. Harry Potter is coming to the Hollywood Bowl for a night filled with magic when they screen the fourth Harry Potter film, Harry Potter and the Goblet of Fire, on the Bowl’s jumbo screens while the LA Philharmonic performs Patrick Doyle’s memorable score live.

21. Back for the 15th year in a row, The Independent Shakespeare Co. presents Shakespeare in the Park at the Old Zoo in Griffith Park with free performances Thursday through Sunday of A Midsummer Night’s Dream. FREE

22. The Silver Lake Picture Show continues with films Sunset Triangle Plaza every other Thursday through mid-September. The event features DJ sets or live music from local bands, along with short films from Los Angeles-area filmmakers and a feature film. Steven Spielberg’s 1975 thriller Jaws will be screened this week. FREE

24. Enjoy free family-friendly outdoor movies in Malibu thanks to Screen on the Green at Trancas Country Market every Thursday through September 13. This week Finding Dory will be screened. FREE

26. The night market at hilltop Asian restaurant Yamashiro back for 2018 every Thursday, from 5 to 9 p.m., through September 27. Angelenos can enjoy a farmers market, freshly prepared foods and Yamashiro’s unbeatable views of Hollywood.

27. Beyond the Streets is a fully immersive exhibition of street and graffiti art comprised of over 30 artist in a massive 40,000+ square feet exhibits. Artist are an eclectic mix of street and beyond including Retna, Shepard Fairey, Kenny Scharf Dennis Hopper and Jenny Holzer. Open Tuesday through Sunday this week. Open Tuesday through Sunday this week. Check for discounted tickets before making your purchase. DISCOUNTED (via Goldstar)

29. July 1-7 is Clean Beach Week and beauty innovator QYKSonic is hosting a ‘Clean The Beach’ event at Huntington City Beach on July 5  from 9 a.m. to 2 p.m. to help pick up the aftermath of what July 4th causes.

30. Rooftop Cinema Club returns to the rooftops of LEVEL in DTLA and NeueHouse in Hollywood with multiple screenings this week that include Anchor Man, Ghostbusters and more.

31. The Hammer museum will host a live broadcast of the FIFA World Cup this Friday and Saturday during the quarterfinals. FREE

32. The Music Center’s annual Dance DTLA series is back for 2018 with a series of Friday-night events at Grand Park. This week features Dance DTLA an evening dedicated to line dancing. Enjoy music, dancing, and more from 9 p.m. to midnight. FREE

33. Are you a Chase bank customer? Got a freebie you might want to know about. Coolhaus is teaming with the Forum and Chase to hand out free ice cream sandwiches to Chase customers on Fridays all summer long. Locations will change every Friday, and the offer is ice cream sandwich per cardholder. Get more info here.

34. Barnsdall Fridays returns to Barnsdall Art Park for the tenth year in a row, with evening tastings of boutique wines and music from KCRW DJs perched atop a hill with incredible city views.

35. For over 30 years, Grand Performances has offered a variety of performance events at California Plaza, for free. Their 2018 summer series runs June 1 through August 18. Performing this Friday is Ginkgoa; The Vignes Rooftop Revival performing the music of Django Reinhardt.. FREE

37. The Griffith Observatory hosts a monthly forum where some of the most amazing phenomena in the known universe are explained and discussed. It’s called All Space Considered and it takes place on the first Friday of every month. FREE

38. Madame Tussauds in Hollywood is throwing a 80’s style midnight party.  In collaboration with 1987 Juices the event is a workout party with live music by DJ Lalaland and cold pressed juices. 80’s workout wear is suggested.

39. Since its the first Friday of the month check out all the cool events happening around town including block parties and art walks for First Fridays.

July 6 is National Fried Chicken Day, celebrate with the ultimate cheat day at some of our approved fried chicken spots below.

Fried Chicken sandwiches are up there with burgers in my personal ranking of “things on buns” and this week restaurants are highlighting their best crunchy creations. Check out the ones that stood out below.