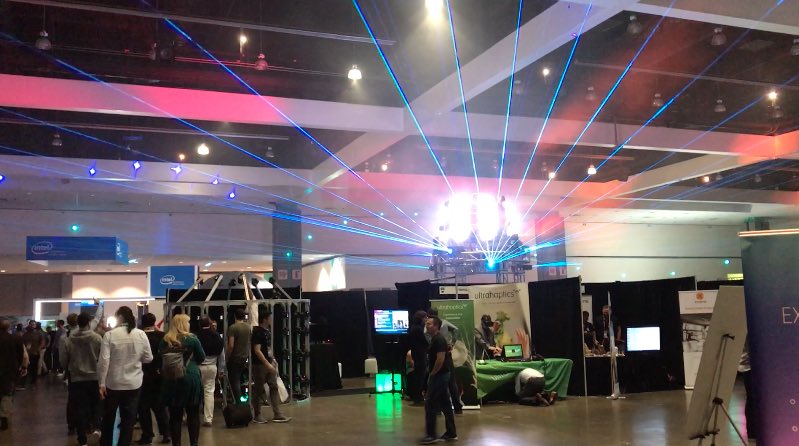 1.Kick off the Los Angeles Times FOOD BOWL at Rossoblu. Their launch party is themed “Things in a Bowl” and guests will feast on delicous eats from LocoL, Rossoblu, Night + Market Song, Chengdu Taste, Honey Kettle, Shibumi and DTLA cheese.

3.CatCafe Lounge just launched PAWS Yoga a restorative yoga class where you’ll get your namaste in while hanging out with adorable cats! They plan to do this every Monday to help raise money for their non-profit cafe.

5. Immerse yourself in eight days of French film, documentaries, and TV shows when the COLCOA French Film Festival takes over the Directors Guild of America (DGA) in Hollywood from April 23-30.

7. Le Petit Paris located in Downtown will celebrate International Jazz Day this Monday with a live jazz performance and happy hour specials from 4:30 – 7:30 p.m. that include $1 oysters, $18 bottomless rosé and other food/drink specials.

8. The Mermaid Comedy Hour returns to the Hollywood Improv with a fierce lineup that includes Zainab Johnson, Emily Maya Mills and more.

9. Bar Keep Tales is L.A.’s only bartender storytelling show. Set inside our city’s oldest distillery, Greenbar Distillery, guests will listen to hilarious, sad and straight up crazy stories from some of the best local bar keeps in the city.

10. It’s Grunion season here in Los Angeles. Get to know about these silver fish and observe them come up from the beach at night to spawn and lay eggs this Tuesday during Meet the Grunion at the Cabrillo Marine Aquarium in San Pedro.

11. E.P. & L.P. in West Hollywood brings back their stylish cinema series Melrose Rooftop Theatre starting on May 1 with a screening of Pretty Woman. Choose to just watch the movie or purchase a three course dinner package before hand. There will be concession style snacks and cocktails for sale as well.

12. “The Black Book Vol. V: Hustle & Flow: A Visual Anthology of Black Labor, Work, and Life” presented by Ernest Hardy and Tisa Bryant at the Hammer will assemble a post-hip-hop visual anthology of film and music clips to examine the singular history of black labor, work, and life in America. FREE

13. Join José Andrés, Jonathan Gold, Zoeey Deschanel and a slew of other luminaries for The Power of Food: An Evening with José Andrés & Friends taking place at The Wiltern. The event will feature a cook-off, a showcase of rising sous chefs, discussions and a dinner reception.

14. The Tony and Olivier Award-nominated musical Blues in the Night brings its show stopping production to The Wallis now until May 20. Check for discounted tickets before making your purchase. (DISCOUNTED) via Goldstar

15. Rooftop Cinema Club returns to the rooftops of The Montalban in Hollywood and LEVEL in DTLA with multiple screenings this week that includeI, Tonya, Goodfellas, Sleepless in Seattle and more.

16. Happy Place has found a new home at LA Live’s Event Deck, opening on April 26 and running through May 27 the very Instagram friendly experience will feature a giant pot of gold and indoor confetti dome, a bath tub filled with rubber duckies and more. Check for discounted tickets before making your purchase. DISCOUNTED (via Goldstar)

17. Visit the Pasadena Showcase House of Design, a majestic Mediterranean masterpiece built in 1915 and designed by distinguished architect Reginald Davis Johnson, from April 22-May 20. The tours have been going strong since 1948, it’s also one of the oldest, largest and most successful house and garden tours in the country.

18. Amy Herzog’s Belleville continues its first-ever Los Angeles run at the Pasadena Playhouse this week. The play stars Anna Camp (Pitch Perfect, True Blood) and Thomas Sadoski (Life in Pieces, The Newsroom) in a production that Entertainment Weekly calls a “shocking thrill ride that will leave you breathless.” Show runs until May 13. Check for discounted tickets before making your purchase. (DISCOUNTED) via Goldstar

20. The Spare Room at the Hollywood Roosevelt Hotel is the setting for the Next Gen Bowl Bash a friendly bowling competition between some of Los Angeles’ top young chefs, including Joe Perez of Winsome and Darren Sayphrarak of We Have Noodles. Join your favorite chefs bowling team, dine on dishes from the up-and-coming culinary stars and sip on a signature cocktail from The Spare Room’s Yael Vengroff. Live music, free games and bowling all night is to be expected.

21. Art duo Dosshaus transforms the Corey Helford Gallery into a flop-house hotel from the 60’s made entirely of recycled cardboard hand painted to look like black & white illustrations. The exhibit houses hundreds of individual pieces including a “Paper-Thin Hotel” with several life size rooms. This is the final week for the exhibit which concludes on May 5. FREE

22. Boss Jr. presents Paul F. Tompkins, Carl Tart and more at The Clubhouse in Los Feliz. The free comedy show features the best improvisers and veteran performers in our city. Added bonus, they also give out free baked goods and drinks and free parking. FREE

23. The Taste of Downtown Glendale will transform Brand boulevard in Downtown into a food and wine tasting party with dozens of vendors.

24. The Museum of Failure has a new location on Hollywood and Highland with new exhibits and products that include Juicero, Facebook Gifts, RCA SelectaVision, Pets.com, and Google Wave. There’s also an entire section dedicated to Hollywood with some of the industry’s biggest fails. Check for discounted tickets before making your purchase. DISCOUNTED (via Goldstar)

25. Bad Housekeeping at Good Housekeeping in Highland Park pops up every Wednesday now through May 30. On these nights you’ll find libations inspired by bad recipes of the past including a ‘glazed ham’ and cherry cordials cocktail.

26. Museum of Selfies opens on April 1 and will run till May 31 with 10 interactive exhibits that welcomes visitors to take a closer look into the cultural phenomenon. The curators of the Glendale museum have also collected an array of Instagram-inspired art as well as an Iron Throne made of selfie sticks for guests to enjoy.

27. Effervescence is a showcase of the finest Champagne and sparkling wines, taking place at four great Los Angeles venues — Republique, the Kimpton La Peer Hotel, Avalon Hollywood, and Kali — from May 3-5.

28. The night market at hilltop Asian restaurant Yamashiro back for 2018 every Thursday, from 5 to 9 p.m., through September 27. Angelenos can enjoy a farmers market, freshly prepared foods and Yamashiro’s unbeatable views of Hollywood.

29. The Unauthorized Musical Parody of Clueless takes over the Rockwell in Los Feliz with Broadway style performances in an intimate cabaret setting. Happening Thursday and throughout the weekend. (DISCOUNTED) via Goldstar

30. Chinatown After Dark going down at Far East Plaza happens every first Thursday of the month and is a testing ground for chefs in our city as well as a place to enjoy local music.

32. Stash House, a new escape room in L.A. will allow you and your friends to get actively involved in a crime drama — with zero chance of going to prison. Happening all week.

33. The bi-annual Matisse Footwear warehouse sale will have highly coveted styles at 80% below retail, with prices starting at $10. Happening May 3-5 in El Segundo.

34. Grab a beer and pull up a chair. Last Laugh Comedy is brining the laughs to Angel City Brewery with Jc Currais, Jeanne Whitney, Alex Dunog and more on the bill.

35. First Thursdays at The Broad takes places from 4-7 p.m. where free admission to Jasper Johns: ‘Something Resembling Truth’ will be issued starting at 3:45 p.m.  No reservations are necessary. FREE

37. VRLA: A New Reality comes to the Los Angeles Convention Center’s South Hall on May 4-5 for the ultimate experience with the next generation of immersive and transformative technology. As the world’s largest virtual reality expo you’ll meet a thriving community of developers, entrepreneurs, enthusiasts and more.

38. Urban Death: Spring, a haunted theater attraction, is coming to Zombie Joe’s Underground Theatre Group in North Hollywood this Friday. Urban Death have terrorized audiences in L.A. for over a decade. Expect a completely new experience of inexplicable horrors and unfathomable monstrosities for this spring edition.

39. The Griffith Observatory hosts a monthly forum where some of the most amazing phenomena in the known universe are explained and discussed. It’s called All Space Considered and it takes place on the first Friday of every month. FREE

41. The new swan-shaped paddle boats are making a big splash with Angelenos. Start the weekend right with a ride on a Swan in Echo Park Lake.

42. May 4 is Star Wars Day. A worldwide celebration that various businesses take part in. The Short Stop will have guests dancing to cosmic tunes, drinking themed drinks, part taking in Star Wars happy hour trivia, and costumes are encouraged for free admission.

43. First Fridays return to the Natural History Museum this Friday. The event will explore “L.A. Backstory” with NHMLA History Department, there will be a discussion on architecture and design and live music provided by Homeshake and Earth Helen Brown.

44. Royce’s Arcade located in Chatsworth houses over 100 arcade games. On Fridays through Sundays they open their doors for unlimited gaming for just $5 per person.

45. The VOID’s virtual reality experience Star Wars: Secrets of the Empire is now open in the Glendale Galleria. The “hyper-reality” experience puts players in a 360 virtual world allowing them to touch, smell, and sensing their surroundings.

46. Take a stroll down the T.V. Hall of Fame Plaza in North Hollywood. Dedicated to television pioneers, you’ll see a 27-foot Emmy Award, a life-sized statue of Johnny Carson and other legends of the small screen contained in the plaza. FREE

47. Step inside The Museum of Illusions in Hollywood and find yourself in a classic painting, part of a cartoon, part of current events, inside movies and much more. Highlights include watching the Titanic go down, “climbing” a sheer cliff and other eye popping visuals. Happening all week.  (DISCOUNTED) via Goldstar