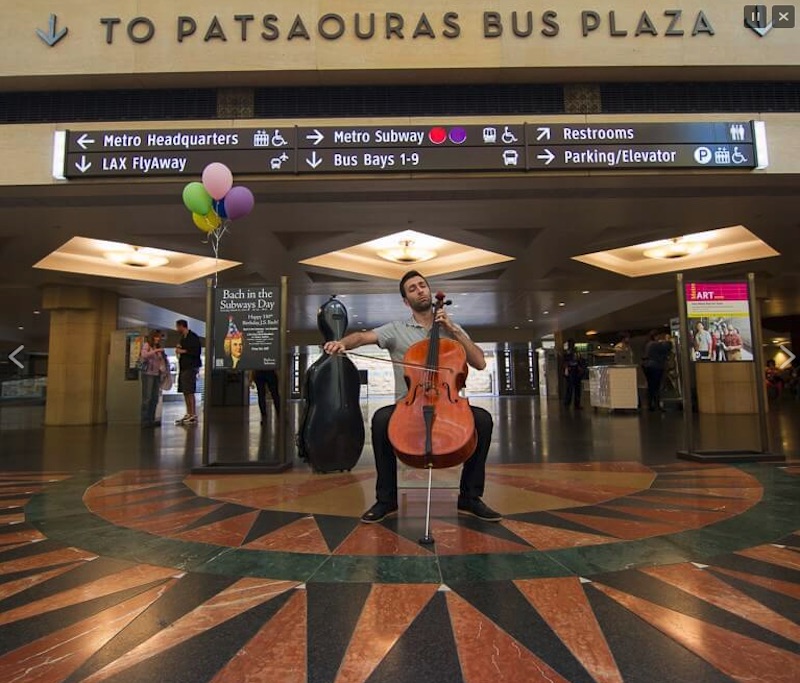 1. In honor of J.S. Bach’s birthday, Bach in th te Subways returns to L.A. March 21-25 with free performances at Union Station, North Hollywood, Glendale, and other public venues. The events are highlighted by a 10-hour Bach Marathon at Union Station on March 24.

2. The Siren-inspired POPSUGAR x Freeform Mermaid Museum will feature a photo spot that allows guests to look as though they’re floating in an underwater garden plus a 360-degree animated underwater projection and soundscape. It’s free to attend and runs March 22-25.

3. The VOID’s virtual reality experience Star Wars: Secrets of the Empire is now open in the Glendale Galleria. The “hyper-reality” experience puts players in a 360 virtual world allowing them to touch, smell, and sensing their surroundings.

4. Premiere TV festival PaleyFest LA returns to Hollywood’s Dolby Theatre March 16-25 for another year of cutting-edge programs and panels connecting television fans with the stars of their favorite shows. Check for discount tickets before making your purchase. DISCOUNTED (via Goldstar)

7. Movie Under The Guns is a movie night aboard the Battleship Iowa in San Pedro. Free to the public they’ll screen 20,000 Leagues Under The Sea. FREE

8. There’s a Milk Bar Pop-Up at Night + Market Sahm in Venice this Friday from 7 to 11 p.m. Treat yourself to an after-dinner bite of b’day truffles, cookies, crack pie and more.

9. A free, interactive Ready Player One pop-up maze lands in Hollywood March 18 to April 1. The pop-up is part of the promotional run-up to Stephen Spielberg’s Ready Player One movie. Taking place at Hollywood and Vine the experience is a “choose-your-own adventure” maze with audio/visual installations, interactive displays, video games, film props, actors, music, and set replicas. Keep in mind the reservations are booked full but they are accepting walk ups and have a stand by line. FREE

10. The grand opening of ART Up! will take place at Beyond The Lines Gallery and Event Space in Downtown Los Angeles. The pop-up art show will host four shows in a row, live music, food, drinks and comedy shows.

11. Step inside The Museum of Illusions in Hollywood and find yourself in a classic painting, part of a cartoon, part of current events, inside movies and much more. Highlights include watching the Titanic go down, “climbing” a sheer cliff and other eye popping visuals. Happening all weekend.  (DISCOUNTED) via Goldstar

13. The Museum of Failure returns at a new location on Hollywood and Highland with new exhibits and products that include Juicero, Facebook Gifts, RCA SelectaVision, Pets.com, and Google Wave. There’s also an entire section dedicated to Hollywood with some of the industry’s biggest fails. Check for discounted tickets before making your purchase. DISCOUNTED (via Goldstar)

14. 260 LA will host a Rent The Runway sample sale at their Beverly Hills location from March 20-25.

16. There’s a Blues Brothers screening in 35mm at the Vista this Friday.

17. Greenbar Distillery has teamed up with The Burrito Project and a select list of local bars and restaurants, to provide thousands of burritos to those in need in the Los Angeles area. Simply go to a bar on the list and order a CITY Bright gin cocktail from there Greenbar Distillery will donate a burrito to The Burrito Project. Get more info here.

18. The Groundlings: The Completely Different Late Show is a hilarious improv show by the cast of the Groundlings’ Main Company. Audience shout suggestions throughout the night for improvisational scenes performed by some of the best in the business. It’s also a testing ground for brand new material for the Groundlings’ main show. DISCOUNTED (via Goldstar)

19. 12th Annual Santa Monica Airport ArtWalk will host art exhibits and demonstrations, alongside various theatre and music workshops. The ArtWalk is free and open for all ages. FREE

20. The Norton Simon Museum celebrates French artist Edgar Degas with a night of interactive workshops like sculpting and drawing, live entertainment including harp and cello performances and more.

21. The new Waffles and Beer Festival debuts at Pershing Square in Downtown Los Angeles March 24-25 to celebrate the Swedish tradition known as Waffle Day. The festival will offer a wide variety of savory and sweet waffles and an array of craft beers for sale along with live music and more.

22. Esotouric Bus Adventures presents Pasadena Confidential a four-hour luxury coach tour in the City of Roses. From the Sphinx murder at Masonic Hall to the strange death of Eraserhead star Jack Nance the tour will make your toe’s curl with it’s shocking stories about the beautiful and seemingly normal town. Check for discount tickets before making your purchase. DISCOUNTED (via Goldstar)

23. adidas teams up with Na-kel Smith for 3 Rooms, a multi-sensory shopping experience taking place at HNYPT in Downtown Los Angeles. The one-day pop-up will feature limited releases and exclusive collaborations in three distinctive, unpredictable environments, all of which were conceptualized by Na-kel.

25. NewFilmmakers is hosting the Los Angeles Women Directors & Narratives Film Festival a celebration of independent cinema in spotlighting female filmmakers and stories. Check for discount tickets before making your purchase. DISCOUNTED (via Goldstar)

26. Brennan’s will host a Hula Hoop Dance Class with Tika Moini at 9 a.m. this Saturday and Yoga with Maha on Sunday. Both classes are $15 and includes a beverage of your choice after class when brunch starts.

27. There’s a free presentation at the Studio City branch of the Los Angeles Public Library with Historian Mary Mallory about the 1938 flood and its aftermath in Studio City. FREE

29. The city of Whittier will host an Eggxtravaganza this Saturday at Parnell Park. This free event will include a helicopter egg drop at noon, pictures with the Easter bunny, train rides, a family fair, and more. FREE

32. Target is hosting The Ultimate Family Festival at the Rose Bowl in Pasadena this Sunday. The free concert will feature chart topping acts like One Republic, Charlie Puth, DJ Questlove, Charli XCX, and Troye Sivan. Though all of the free tickets are booked up, festival organizers tell us interested parties can still sign up for the waitlist. Should additional tickets become available, guests will be removed from the waitlist and notified via email. FREE

35. What’s the weirdest thing you can do this weekend in L.A.? Exercise your inner demons at L.A.’s creepiest sound bath. Dark Ambient Sound Bath includes primal screaming and an ‘exorcism’ theme. Yikes!

36. Relive the glory days of vaudeville with The Return Of Vaudeville at The Wiltern. This glamorous soiree will offer Prohibition-style cocktails and a vintage variety show brimming with classic acts like aerial acrobatics, burlesque, comedy, snake charming, and live music. Check for discount tickets before making your purchase. DISCOUNTED (via Goldstar)

38. La Carretera is a unique vintage car and music gathering harkening back to the La Carrera Panamericana races in Mexico of the ’50s. Taking place in Downtown Los Angeles’ Arts District the event will feature gorgeous vehicles from the ’50s, ’60s, and ’70s in a retro party atmosphere.

39. Vegan Street Fair returns to North Hollywood for another year of plant-based eats from Los Angeles, Orange County, San Diego, the Bay area, and as far as Chicago and New York. Entrance is free.

40. Trashfish will collaborate with Imperfect Produce for an Elevating Underloved Foods dinner party at Feastly in Venice. The evening will celebrate the seafood and produce that often get overlooked. See the full menu here.